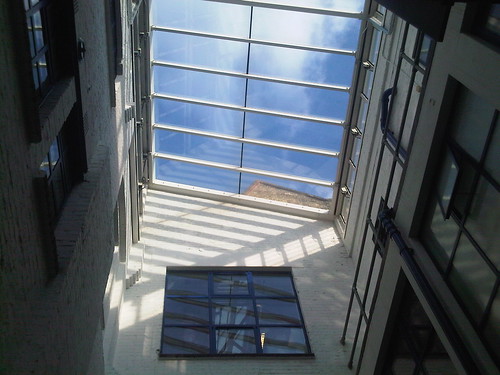 Despite the beautiful blue sky you can see in this photo – taken this afternoon – just over an hour after it was taken I was stood in the middle of what can only be described as a blizzard. You know the UK is ‘over’ the snow when it had been falling for at least an hour this afternoon before anyone even deemed to comment on it. I’m still firmly in the ‘love snow’ camp, but to be honest it was such rubbishy, fluffy snow, there isn’t much good can come from it apart from getting you cold.

The photo was taken in one of the many odd corridors that there are in our building at work – a building which was apparently once a carpet factory, though you’d think it was actually a prison from this area of the building. I took the photo from the edge of B-block, near the warden’s office :D