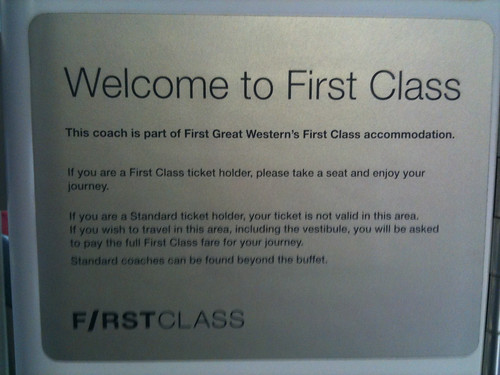 My Year in Photos – August 4th – "How do I hate thee? Let me count the ways…", originally uploaded by henweb.

Let me start this rant with a disclaimer. Whilst I now choose to drive to work each day (along the slow-moving car park that is the M4) I spent a good (?) 6 years commuting to work – first to Bath, then to Chiswick – on First Great Western trains. That’s over 3,000 train journeys – I’m not even going to think about how much money I have spent on that. But anyway, I think I’m in a reasonably good position to criticise a company with whom I now only rarely have to interact with.

I spent the first 4+ hours of today travelling on trains. Firstly a reasonably uneventful journey from Reading to Paddington, then a 3 hour journey from Euston to Lancaster. The second of those journeys was with Virgin Trains, and included an almost 2 hour period where the buffet on said train was closed – first due to staff shortages then due to a “stock take”. I won’t even go in to how annoying this was – especially when I could see the “stock take” going on from where I was sitting, and it looked more like a man reading his newspaper to me. But anyway, that was my morning of travel.

The afternoon featured a very similar journey in reverse, but the final, London to Reading part of said journey was what really pissed me off. First Great Western, in all their wisdom, have decided that they no longer like ‘regular’ passengers standing in the vestibules of the First Class carriage – even on ridiculously over-crowded trains. They’ve even put up a stupid little sign – see today’s photo. I find this REALLY flipping offensive.

The only situation where one has to stand in these stupid little ‘vestibule’ areas is when the trains are totally over-crowded and you can’t get a seat. A seat that you have paid for with your ridiculously expensive train tickets. So it’s not exactly a luxury. Indeed, standing in these areas is no more luxurious than the ‘vestibules’ of the rest of the train.

So for some jumped-up train inspector to try to charge you extra for the privilege of STANDING in this area of the train is frankly a f**king outrage. And you just KNOW those bastards will enforce this with great glee – heck, I’ve seen them do something very similar even without the sign. What a total crock of crap.

Every time I travel on the train these days, I’m reminded of how much I love my car. I know we’re supposed to be embracing public transport in these days of global warming, but unless the transport companies get their acts together, I for one will be sticking with my car.