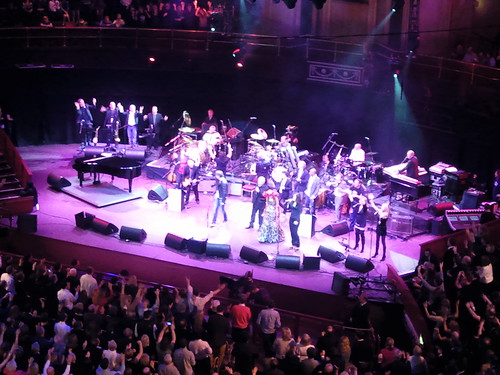 My Year in Photos – November 17th – "Trust the Princes", originally uploaded by henweb.

Tonight I attended my third big Prince’s Trust event, namely their re-launched Rock Gala concerts – the first for over 20 years. The concert itself was utterly brilliant – anything at the Royal Albert Hall is pretty brilliant in itself, but this was a real doozy.

This photo was taken during the final song – an all-star collaboration on Queen’s “We Will Rock You”. You may not be able to make them all out, but the photo includes Paloma Faith, Tom Jones, Brian May, Roger Taylor, Phil Collins, Jamie Cullum, Jools Holland, Alison Moyet, Midge Ure and plenty more wrinkly rock stars whose names I have forgotten. Quite a line-up!