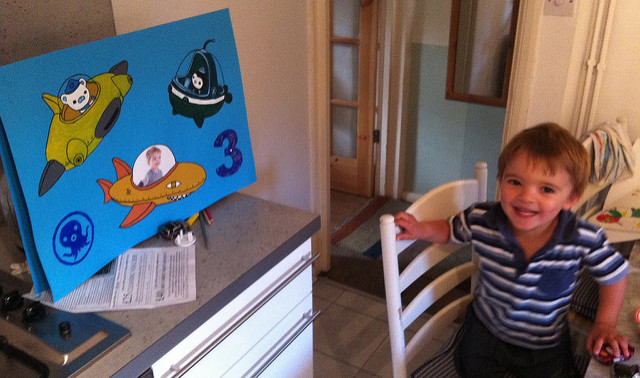 As I mentioned in a post earlier this week, I’ve been spending my evenings this week working on Robert’s birthday card. Not a card for me to give him on his birthday – no, this is (or so I thought) FAR more important than that. This is the card we’ve sent in to the BBC Cbeebies channel, where they will (hopefully) show it on the TV on Robert’s birthday.

We’ve never gone to the bother of doing this before – though we have friends who have done it every year of their child’s life, so we felt like we owed it to Robert to try this year. After all, this is the first year where he’ll actually appreciate seeing his little face on the TV (I don’t see much point in doing this for a 1-year-old!) so it seemed like the right time.

As it turned out, this wasn’t the easy task I’d originally anticipated. This is partially my fault – party for leaving it so late (the card needs to be sent in at least 4 weeks before the child’s birthday) and partly for setting myself such a tough plan. Whilst Sara pointed out afterwards that I could easily have printed pictures off from the internet and merely stuck them on the card, decorating as I went, I stubbornly opted to paint it entirely myself. I have no idea why really – pride perhaps?

Anyway, having been to Hobbycraft to purchase my materials (including at least £30 spent on acrylic paints, paint-brushes, card and pens) and planned out the layout, I spent 5 evenings painting my design (you can see the finished product below). Having done the painting, I did the outline in marker pen, then added some glitter for a little extra pazzaz!

I was all finished by Friday morning, so took the finished product to work with me – but only after coming to a crushing realisation…

For reasons that escape me now, we decided to give Robert a sneak preview of the card (photo below) which would be hopefully appearing on the TV. Robert was VERY impressed – all kudos to my wife Sara for suggesting the subject of the card, The Octonauts. But when we explained that we would be sending the card to the BBC to be shown on TV, Robert wasn’t very impressed at all. He said he’d much rather he keep the card and we didn’t send anything to the BBC! Hmm.

At work, I decided I could get round this sticky situation by making a copy of the card – which I subsequently did for the princely sum of £15 at a local reprographics shop. With my copy safely stored, I set about trying to find an envelope big enough to transport the card safely – and to pay for the postage, which apparently had to be Parcel Force due to it’s size. Fifteen pounds later and the card was winging it’s way to the BBC.

So, a good £60 and a week of work later, and our card is on it’s way – with a glossy copy at home for Robert to keep.

Of course, they might not even SHOW the bloody thing. At which point I might strike “Send a birthday card to Cbeebies” off my “to do” list for 2012…!

2 thoughts on “Fatherhood²: A £50 Birthday Card For Your Son? Priceless, Apparently!”