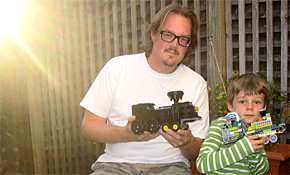 Play well my son, for tonight you go to bed with no supper

A wise sage, I think it was Superman, once said “The son becomes the father and the father becomes the son”. This historic bond between blood males has become the backbone of the family unit and when a shared passion unites them even further, this connection is made all the more unbreakable…

That is unless the passion is LEGO.

Of course there have been good times. As each new series of collectable minifigures were released, a system of bartering allowed us both to complete our collections with the minimal number of duplications and many a weekend has been shared constructing replicas of German U-Boats or Martian War Machines. But below this thin layer of mutual appreciation lay a crack so massive that it threatened to rip apart the very fabric of domestic harmony.

As a child, I too was a builder. LEGO didn’t really come in such a vast selection of pre-defined kits, so I used my imagination to construct new and exciting models. Sometimes these models would resemble giant spaceships or futuristic cars, but they were always ephemeral. Each new creation born from the scattered cuboid remnants of its predecessor. This is how my son views those little plastic bricks. I, on the other hand, now think differently.

As an adult, I view each purchase like a work of art. A hand-made sculpture to be displayed and looked upon with appreciative eyes, as beautiful as any Lalique or Clarice Cliff and just as untouchable by tiny hands. Each time I see my son poke at the pieces on display I flinch, fearful that they may crash to the floor and I will be forced to search out the carefully preserved instruction manual and begin the process of restoration. I try again and again to explain to him that these particular colourful creations are collectables, but to him they are like forbidden fruit, ripe for the picking, ready to be sliced up and added to his existing plastic salad.

Strewn around my sons bedroom are the remains of Christmas and Birthday presents that I have been forced to build only to witness their magnificence for a few fleeting seconds before they are snatched away to become part of some Frankensteins’ Monster. One particularly traumatic memory I have is of the Emerald Night, a breathtakingly detailed model of a classic steam locomotive that I too had desperately wanted. This intricate piece of plastic engineering consumed me for almost four hours, yet barely lasted a week in it’s manufacturer recommended configuration.

These differing views have unfortunately led me to relocate my LEGO collection to the Fortress of Solitude, or attic, and enjoy their angular beauty on a much less frequent basis. It is, however, a price I am willing to pay for the piece of mind of knowing that they are safe from the clutches of my miniature arch nemesis.