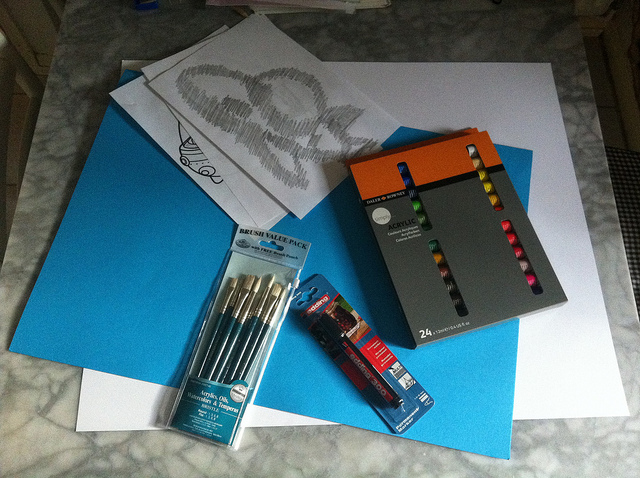 Today I finally started work on something I should have begun several weeks ago. I also reconstructed the Cot which had been gathering dust in the garage, in preparation for Baby #2’s imminent arrival. But that was nothing compared to my most important task – one which I’ve never undertaken before, and could make or break my reputation as a father.

Yes, today I set to work on Robert’s Cbeebies Birthday Card. I know, I know – I really should have sent it by now – but I’m hoping I should be able to sneak it in just before the deadline this Friday. For those of you unfamiliar with the Cbeebies “Birthday Time” system, the excellent presenters on Cbeebies read out and show home-made birthday cards to children on a daily basis.

In order to get your card shown, there are a number of criteria, amongst them:

All fairly sensible criteria, I’m sure you’ll agree, but the first one seems to be the one Robert is going to struggle with most. When asked who he wanted on his card, he replied: “The Octonauts… and Buzz Lightyear!” – so I don’t know whether he’s going to be pleased or upset when he finds Buzz Lightyear isn’t allowed on the card.

Either way, we’ll find out soon enough – I started work on the card today, though it’s going to take a few more nights of work before it’s ready to send. I’ll post a photo of it when it’s done, if you’re at all interested.

Once the hard part is done (probably finding an envelope big enough to hold it – no folding or rolling allowed!) we’ll just have to keep our finger’s crossed that it makes it to the air… and that we manage to record it!