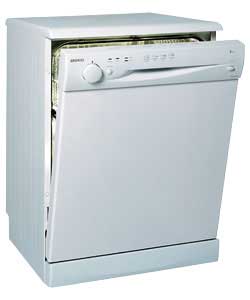 With just under 4 weeks to go until Baby #2 is due, we’re entering in to the final stages of prep-work – washing baby clothes, assembling cots/moses baskets, digging out the baby cutlery, breast pumps, etc etc. Being the second baby makes things a lot easier in some respects – we’ve already got a lot of the equipment and “stuff”, and know what to expect a lot more than we ever did with Robert.

It also means we’re a lot more prepared for some of the time-saving tricks we learnt with Robert – some of which I’ve blogged about before, and will doubtless mention again in future posts.

One of the things we learnt VERY quickly after Robert was born was how useful a dishwasher can be – I think we bought our first one just a couple of months after his birth, and it revolutionised our post-meal and evening routines.

So, when our dishwasher developed a couple of pretty major issues in the past few weeks, it became clear that we’d need a new one pretty sharpish. I investigated getting a repair-man in, but it was going to cost at LEAST £150 without parts, so seemed a bit pointless. But we eeked it out as long as possible – until yesterday, when Sara wasn’t even able to OPEN the damn thing because the “open” button has broken so significantly. Time for action…

I didn’t have a grand plan in mind, thinking I’d simply browse around sites like Currys and Amazon to find a good deal. But I decided it might be worth a tweet or two, to see what came back, JUST IN CASE. So I posted this:

I expected nothing much to come from it, so was surprised to get a reply from a customer service agent from a website called “Appliances Online“, telling me that they had some great deals on on dishwashers.

Nice message, and a good use of Twitter to monitor for people who might be potential customers, but I don’t fall for sales messages that easily! So I tweeted back “@AppOnline But do you have some great discounts you can offer me in exchange for me saying how great you are? ;-)“, to which they (basically) responded with a firm “No”.

Having never dealt with Appliances Online before, I didn’t really feel I had much to lose, so I tweeted: “Well, @AppOnline get points for reaching out in response to my tweet. They lose points for not offering me a social discount. Anyone else?”

Their next tweet proved my “negotiation” skills have improved somewhat over the years, as they asked me what I might be able to bring to the table, to which I responded explaining that I have a blog (as well as other social profiles), at which point we took it “private” to direct messages.

The ensuing conversation resulted in me being offered a nice discount off a good model of dishwasher, in exchange for a mention on my blog and a tweet or two. This is the part that impressed me the most: I messaged back asking “would you like the post to be honest about the discount, or more vague and just praising your customer service?”. This is where a lot of brands might fall down (in my eyes), so all kudos to AO for not doing so.

The guy I was talking to responded that I was free to write whatever I like, which impressed me greatly. I’m not entirely sure how I would have taken the conversation if they’d asked me not to mention the exchange – I’m not really a fan of bloggers not divulging when they’ve been paid to review a product, and this didn’t seem too different. So I’m really pleased that they wanted me to be honest and open about what had happened.

The dishwasher is being delivered tomorrow morning, under 48 hours after I placed the order – I shall of course let you know if anything goes wrong, but wanted to share the story while it was fresh in my mind.

And of course a big “thank you” to the team at Appliances Online – especially Yossi, their social media guy, for being so “ahead of the curve” when it comes to using Twitter as both a sales and customer service tool. If only more people would learn from this… I might be able to get myself a nice new TV as well! :-)

1 thought on “Fatherhood²: A Social Media Lesson in Customer Service, aka How to Keep a Blogging Daddy Happy”