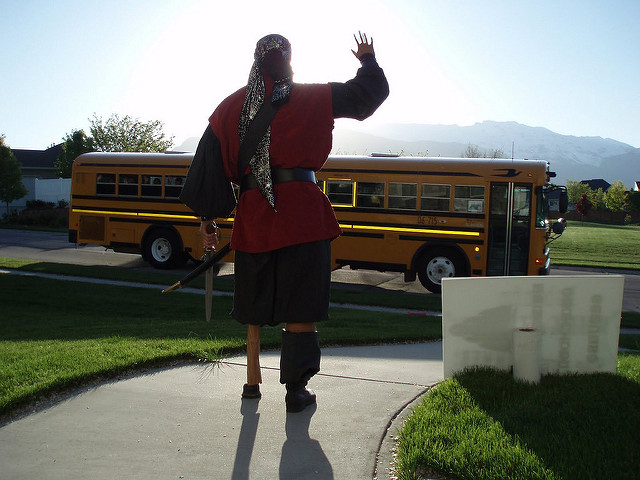 In the 6 months I’ve been writing blogs about fatherhood so far, I’ve resisted the temptation to write too much about anything outside of my own experiences – whilst I’d love to update this thing daily, I don’t want to just start rehashing other people’s stories, and I doubt it would make very interesting reading. But this story captured my imagination something chronic, so I wanted to point people towards it who might not have seen it.

You can read the story here (or at least one of the MANY stories that have covered it) but here’s the short version for the time-pressed.

American father-of-three Dale Prince spent 170 days embarrassing his oldest son, in a fashion that most parents would be hard-pushed to deny is utterly brilliant. When Price found out that his son’s school bus route was changing, driving right past his house, he decided to give his son a wave from the porch – much to his son’s embarrassment. As Rain Price told the reporter, having your father waving you off on the first day of your new school year was not what most teenagers want.

So when the bus passed the house on the second day, Rain and his friends were surprised to find his dad was once again outside the house waving – this time dressed up as an American Football player.

Dale Prince kept this up for his son’s entire school year – never once repeating costumes, and documenting the entire “project” on his blog – Wave at the Bus.

Here’s Dale in one of his most memorable outfits – as a pirate on the very last day of the project:

As a father who is prone to slightly obsessive behaviour, I can appreciate Dale’s quest – and at the same time I really appreciate the sentiment behind his actions. As Prince himself said in one story:

His dad admits it took a lot of effort to keep it up, but said it was “a way of letting him know that we really care about him, but do something a little different.” He described it as “a father’s way” of saying I love you.

Having religiously completed my “Year in Photos” last year – and having at several points considered either taking a photo every day of Robert’s life and/or recording Sara’s pregnancy growth on a daily basis – this seems like the sort of project I could definitely get behind.

As a fellow father who is always keen to remind his child how much he loves him, I think that any way you can show that in a novel and memorable way is worth doing. After all, Rain Prince isn’t going to forget this little show of affection any time soon is he?