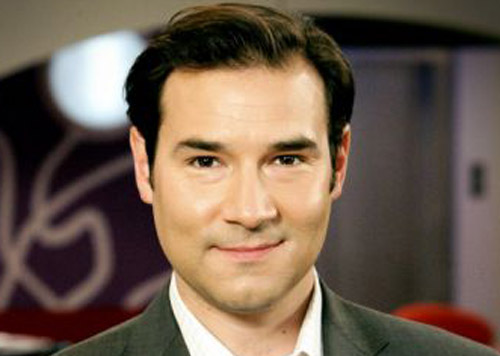 As it’s Father’s Day, I thought it might be nice to show a little love to some of my favourite fathers – famous faces you’ll know, and a few you might not. All of them are dads though, and people who I love to follow online (in a Twitter sense, rather than a stalkerish way!) so I thought I’d tell you why I love them and a little bit about them.

I should also add that it’s my ambition to persuade at LEAST one of these dads to write a post for this blog before the end of the year – something I’m working on at the moment, slowly but surely. Keep ’em peeled for more news on that!

Where might I have seen them? One half of cult-classic comedy-and-hi-jinks duo ‘Adam and Joe’, Adam Buxton is probably most well-known these days as the host of BBC 6Music’s Saturday morning show. He’s also an occasional actor, having been in films such as “Stardust”, “Hot Fuzz” and “Son of Rambow”.

Why do I like them? I’ve been a fan of Adam (and Joe) since they first appeared on Channel 4 back in the late 90s, though my love of Buxton’s zany charm was renewed a few years ago when they started their 6Music show. Adam’s fatherly anecdote (and the occasional appearance of his children in anecdotes and songs) keep me chuckling on a weekly basis, and I often find myself nodding-knowingly at some of the odd situations he finds himself in as a father.

A fatherly moment… Adam recently took inspiration from his son Natty for one of his “Song Wars” songs – it’s definitely worth a listen, and Adam explains where it came from at the start of this clip too…

Where might I have seen them? Probably most well known as director of some of my favourite films, including Clerks, Jersey Girl and the upcoming Redstate, Smith is now a bit of a new-media mogul, hosting his own internet radio station (S.I.R.) and regaling almost 2 million Twitter followers with tales of his adventures and mis-adventures.

Where can I follow them? Smith tweets like a king, occasionally blogs and host an entire network of podcasts amongst many other projects.

Why do I like them? Having become a Smith fan later than some, he has been a dad for the majority of the time I’ve followed his career. But it was the launch of his popular “Smodcast” podcast which really cemented him in my “favourite dads” list, and more recently the show he hosts with his wonderful wife Jen (on S.I.R.), “Plus One Per Diem”. He regularly tells stories of fatherhood, often being moved to tears by the speedy passing of his daughter’s childhood. I can relate to that a lot (and have occasionally welled-up listening!) so his fatherly wisdom is something I really enjoy listening to. Jen herself is another excellent person to follow, though I’ll save her for another, motherly post! :)

A fatherly moment… From an old blog entry:

Harley gets me up at 6:45. I’m starting to group her in with the Alarm Mutts. I bring the dogs and Harley upstairs, my laptop under my arm. I let the dogs out, give Harley some milk and cookies for breakfast, and we head into the living room, opting for a first-time viewing (for her) of “The Karate Kid”. While Daniel-San learns the ways of the Force from Mr. Miyagi, I play UB. Harley loves the flick, and by the end, she’s ready to go right into “Part II”. I suggest we skip to the fourth flick (in which Mr. Miyagi tutors Hillary Swank), but Harley – like all of us when we first peeped “KK” – has a thing for Ralph Macchio, so the much less engaging “KK2″ it is.

Where might I have seen them? I’ve been a fan of Danny’s from (what I believe is) his first TV appearance, alongside one-time flatmate Dave Gorman on “Are You Dave Gorman?”. Since then, I’ve been a big fan of his writing (see if you can spot my face in “Join Me!”), various radio shows and regular articles for both newspapers and magazines. He’s also a very amusing tweeter to boot.

Why do I like them? Danny has always been a very amusing writer, but I was especially pleased when he became a father, shortly after Robert was born. It’s always nice when people you admire find themselves going through similar things to you, so hearing Danny talk about the joys (and nightmares) of parenthood is especially heart-warming for somebody who has followed him for so long.

A fatherly moment… From his excellent column in Shortlist, “Danny Wallace is a Man“:

I begin to vacuum and as I do, there’s a tap on my shoulder. It’s my son. (My wife’s carrying him, obviously — I don’t have a 6ft toddler).

He’s drinking his milk and he’s bleary-eyed and his hair’s all over the place, and this is good, I think, because maybe we can use him as a mop. And then I watch, in slow-motion, as he casually tosses his cup of milk, and it spins and turns in the air, a fine trail of liquid arcing a beautiful path through the air, perfect white droplets ready to land… but where?

It lands on the sofa.

Where might I have seen them? You’ll either know him as the singer in late-nineties pop-indie group “Ben Folds Five”, or for his more recent solo work. He is, quite simply, one of my favourite musical artists. Ever.

Where can I follow them? As well as his website, Folds posts beautiful photos to his Twitter profile on a regular basis. He’s got lots of music you can buy too, obviously.

Why do I like them? I’ve been a fan of Folds ever since his second or third album (what can I say – I hardly EVER spot a good thing fast enough to be considered “there from the start”, like some musos!) and it’s as simple as that really – album after album, song after song, I’ve loved every single thing he has put out!

A fatherly moment… As you’d expect, a few of Folds’ songs have been inspired by his children – this being my favourite: Gracie.

Where might I have seen them? Compared to the other dads featured here, Tetsell is a more recent entry on the “famous fathers” list – though if you’re a comedy fan you may well have come across his work on comedy-sketch-podcast “As it occurs to me” or the TV show “Lab Rats”

Why do I like them? Whilst I love Dan’s work on AIOTM (aiotm), it’s his fatherly tweet that have most endeared him to me. I’ll often log-in to Twitter early on a Sunday morning to find a stream full of American’s heading-off to bed, or the odd drunkard returning home in the early hours. But standing out from all of those will be random tweets from Tetsell who will be sat with his child watching Cbeebies – and he tweets the things we’re ALL thinking when we do the same thing. For that alone you should follow him, though he of course has much more to offer besides.

A fatherly moment… Here’s an example of some of his parental tweets:

Well, there we are – five of my favourites, although there are plenty of others I’ve missed, due mainly to my desire to get so many “F” words in the title of this post! When I can think of five more, I’ll probably do a follow-up…