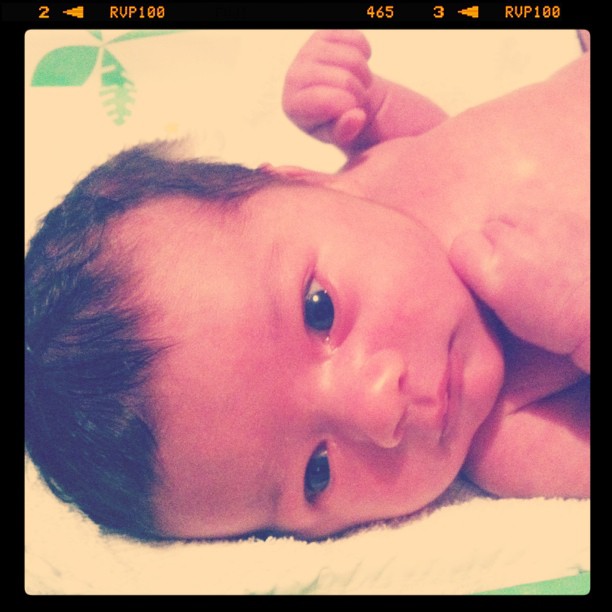 Tomorrow will mark four weeks since baby Frederic was born, so I thought I’d post a quick “progress report” for the little chap. Well, that and the fact that I’ve not blogged for a few days and my sleep-deprived brain can’t think of an interesting topic. But it’ll be interesting for his grandparents, if nobody else!

I should probably add – for those who read my last post, about going back to work – that I’m now firmly entrenched back into my work routine, and haven’t collapsed with exhaustion YET, so things seem to be going okay…

Baby Freddie is progressing nicely apparently. I say apparently because it’s very hard to notice too much change when you see the little guy every day. Sara had him weighed today though, and he’s growing like a weed – when he was born he weighed 6lbs 8oz, and today – 4 weeks later – he weighs an impressive 9lbs and 0.5oz – impressive growth I’m sure you’ll agree!

As some regular readers will remember, when Robert was born he refused to “latch”, so breast-feeding was a no-no. Luckily we (well, Sara!) were able to express milk for him, so he still got all the goodness of breast-milk in those crucial first few weeks. The big advantage of that were 1) I could help to feed him too, taking some of the burden from Sara and 2) you could tell exactly what he was eating – something you can’t do with proper breast-feeding.

Luckily it seems he must be getting the right stuff, growing as fast as he is. It’s also a promising sign that he’s getting closer and closer to the stage where he’ll be able to go a bit longer between feeds, meaning we might get a little more sleep at night….!

Here’s a picture of the young whipper-snapper so you can see how chubby he’s getting!