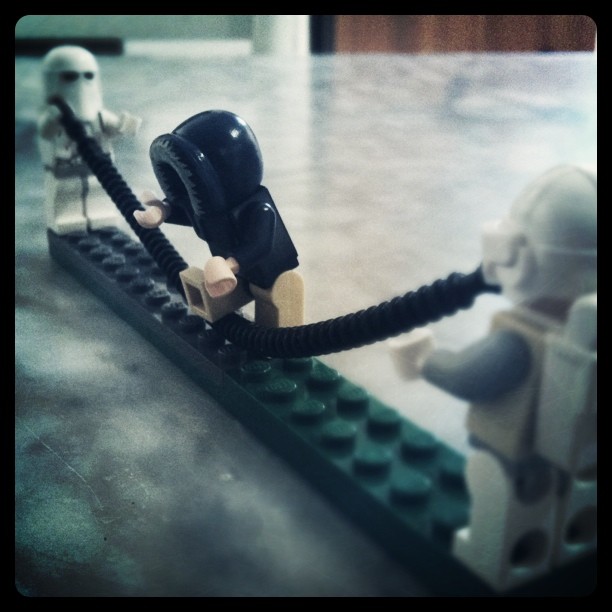 Yesterday was a big day for me as a father – or at least it was the start of a big process. I finally had an ‘Andy’ moment (As in Andy from Toy Story – or Toy Story 3 in particular) as I handed some of my toys down to Robert.

Admittedly I’m a little older than Andy was, and I HAVE given lots of my toys away before. But this was the big one – my LEGO. If Andy’s childhood toy favourites were Buzz Lightyear and Woody, my equivalent was LEGO, of which I had an absolute tonne.

Most the LEGO I used to have as a child is no longer in my possession – though it is still in the family, somewhere. But I’m such a LEGO-addict, I still have a load of sets and bricks that I’ve come to own since leaving university.

Star Wars sets, Harry Potter, plus a LOAD of bricks and roof-tiles from when I went through a phase of wanting to build a scale-model of a house a few years back…! All of which has since been safely stored away in our garage, ready to hand-down when the time is right.

Whilst Robert isn’t really quite old enough for LEGO yet, he is very keen on building stuff. He already ditched his wooden blocks and “MegaBloks” in favour of Duplo, but even that doesn’t seem to keep him amused for long. He has a couple of small LEGO models – both Toy Story themed – and a few spare bricks that I collected-up for him from other models. But nothing you can really build much with.

So, having rummaged through various boxes in the garage, I found a few still-boxed sets which I thought I’d let him play around with – and BOY was he happy with that. An afternoon of LEGO-play ensued, in which I don’t mind telling you I felt a tiny bit emotional that I was finally truly able to share some of my own childhood with my eldest son.

Ultimately, it was decided that it probably wasn’t quite the right time to hand the whole lot down to him, especially with a new baby in the house – tiny pieces of plastic don’t really mix well with crawling babies after all. But we’ve made up a few models for him and they’re now “in circulation” with his other toys, so we’ll see how he goes in the coming weeks.

Incidentally, whilst I was digging around in the bricks, I discovered something which I’ve been wishing for for absolutely AGES – namely, a website that collects up instruction booklets for old LEGO models, which you can download and print. I’ve had a “Hogwarts Express” in the box for about 7 years, but no instruction booklet – while Googling “Hogwarts Express Lego Instructions” I found http://lego-instructions.com/ – well worth a visit if you’ve ever faced this problem yourself…

3 thoughts on “Fatherhood²: I’m Andy, he’s Molly… which one of you wants to be Buzz Lightyear?”