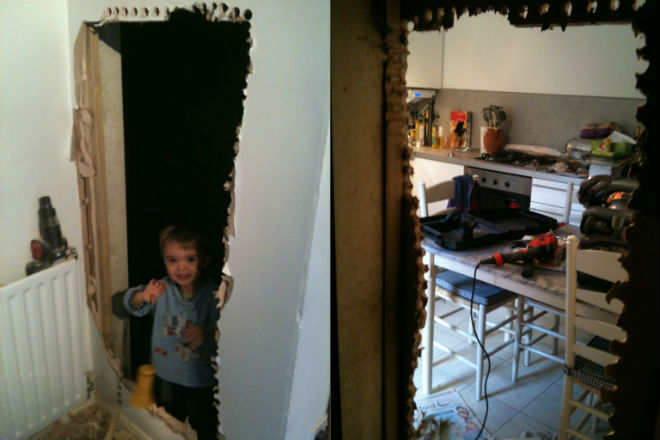 Long ago, before I turned by blogging efforts towards the subject of fatherhood, I had a number of other blogs – most of which can be viewed in the categories to the left, if you’re interested. One of them, entitled “Our First Flat”, was a chronicle of the efforts we made on our house when we first moved in – decoration, DIY, building and the like.

We kept it up for a good few years – until summer 2008, coincidentally when Robert was born! We’ve done a few big jobs since then, including replacing our kitchen (on our own, in the most part!) and of course a selection of child-related projects. But the one we’ve just completed seemed worth a post, since we’re so proud of it.

If you ever read our old blog, you’ll know that the woman who lived in our house before we bought it was a BIG fan of bodge-jobs and half-arsed solutions. If there was a choice between properly fixing something or bodging it, she’d invariably opt for the latter, making out life difficult years later on a number of occassions.

Ever since we moved in, we were curious about a small patch of badly-covered wall in our kitchen, under the stairs. It looked like somebody had drilled a small hole to look behind the wall, then covered it over again. So, our curiosity eventually got the better of us, and we did this to it:

After further exploration, we discovered that there is a cupboard (of sorts) under there, which had at one point been used (though was in a very bad state) and then at a later date covered over – though once again in bodge fashion, with plasterboard laid right over the door! Here’s what it looked like when we got it open:

That was about 4 months ago. Finally, with Freddie having arrived and the house becoming increasingly messy, we decided to get the space sorted. We got some builders in to do the plastering/finishing, and I spent the past few weekends laying laminate flooring and painting the walls. Below is the (almost) finished product – a nice usable space which now houses a new freezer, our microwave and some very useful storage space! What do you think?