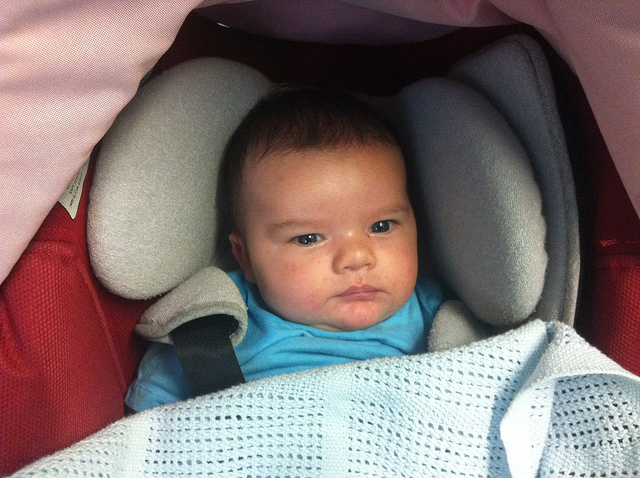 Today was a first for the Elliss family – or at least the latest generation of them. Today was the first day we had to take one of the boys to a hospital (for anything except a visit – or their birth, obviously).

Ever since Freddie was born, we’ve known he suffers from “tongue tie” – something we were very familiar with, as I myself have the condition, as does Robert. It may even be the reason Robert never successfully breast-fed – though that’s just speculation at this point. But either way, we knew Freddie’s tongue movement would be limited somewhat and that it may at some point affect his feeding.

For those not familiar with what tongue-tie (or to give it it’s proper name, Ankyloglossia) is, here’s the wikipedia description:

Whilst it CAN cause issues in later life, particular with speech, our primary concern at this point is how it affects Freddie’s ability to breast-feed – something which has only come to light in the past couple of weeks (as many sites predicted it would). It apparently affects his ability to properly “massage the nipple” – which means he takes in a lot of air (causing bad wind), doesn’t feed sufficiently (causing “cluster feeding”) and generally causes him quite a bit of stress during feeding.

So, having spoken to a health worker at the breast feeding clinic, Sara was referred to the Southampton General Hospital (the nearest county hospital which will deal with such cases after 6-weeks) and we found ourselves sitting nervously in a “quiet room” this afternoon.

The procedure itself is apparently quite simple – though they don’t let you see it, so there could be lasers involved for all I know. All they do is whisk baby away (swaddled in a blanket), snip the skin with some medical scissors and soak up the small amount of blood. He’s then put straight on mummy’s breast to feed, where his mouth begins to heal. Pretty simple.

Despite the relative simplicity, it was still a pretty nerve-racking experience – made worse by the necessity of taking baby away from you while it happens. But I’m pleased to say it all went off without any complications, and we’re now back home with Freddie, where he is already feeding more calmly.

Now, if only they could do something about how bad his nappies smell…! :D

4 thoughts on “Fatherhood²: To the Hospital We Will Go… aka “I feel so tongue-tied””