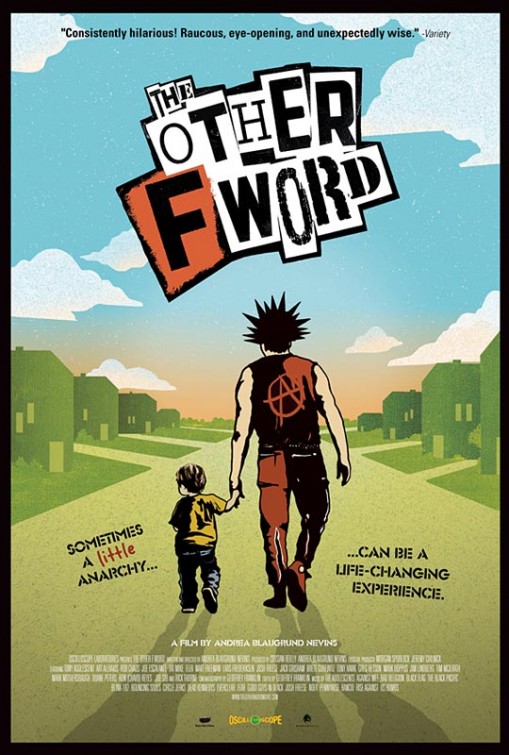 As a father and a blogger – and a former movie reviewer – I was very excited to see the trailer of ‘The Other F Word‘ recently. I can’t remember the last time I saw a GOOD documentary about being a dad – apart from the odd “Fathers 4 Justice” report on something like Panorama, and the focus of those is never particular pro-dad.

‘The Other F Word’ is a documentary about what happens when a generation’s ultimate hell-raisers become dads – the ups, the downs, and the parallels to their own childhoods. It features a lot of faces you’ll recognise, even if you’re not a fan of their music – Flea from the Red Hot Chili Peppers, skate-boarder Tony Hawk and more.

Here’s what the reviewer from Variety had to say about ‘The Other F Word’, in case you’ve not come across it yet:

“The Other F Word is a raucous, eye-opening, sad and unexpectedly wise look at veteran punk rockers as they adapt to the challenges of fatherhood. To be sure, watching foul- mouthed, colorfully inked musicians attempt to fit themselves into Ward Cleaver’s smoking jacket provides for some consistently hilarious situational comedy, but the film’s deeper delving into a whole generation of artists clumsily making amends for their own absentee parents could strike a resonant note with anyone (punk or not) who’s stumbled headfirst into family life.”

As you can probably tell if you’ve read my blog before, I’m certainly not a punk rocker – but if any father tells you they didn’t “stumble head first” in to fatherhood, they’re either a liar or a saint. I for one can’t wait to see this – and as soon as I manage it, I shall certainly be writing a short review for this blog.

Here’s the trailer, to whet your appetite:

The film is being released next week in the US, with no word yet on whether it’ll get a UK release…