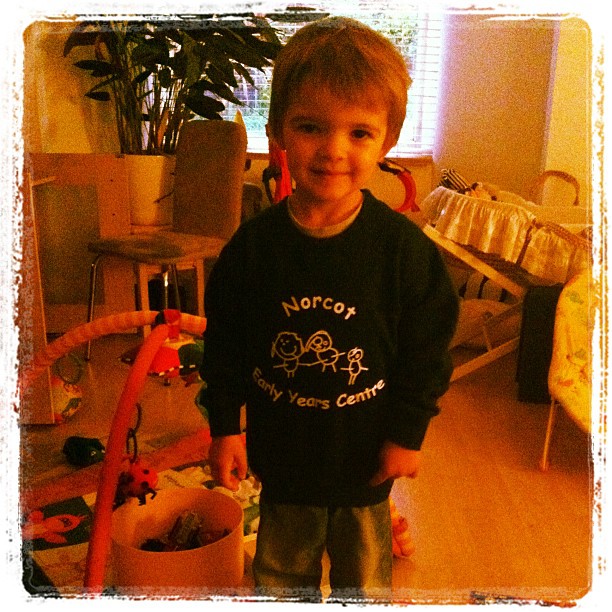 As I blogged about a couple of weeks ago, this month has seen Robert finally making his way in to the big bad world of education, starting full-time (well, if you can call mornings-only “full time” – I guess that’s part time actually…) pre-school.

At the end of his first full week of pre-school, I’m pleased to report that it’s all going OK. I wouldn’t call it “swimmingly” quite yet, but he’s definitely getting in to the routine now.

For the first 5 or 6 days, there were tears on most drop-offs – and I don’t mean Sara’s. Several mornings saw him clinging to mummy’s legs refusing to let her leave, only to be distracted by a clever TA or a toy he hadn’t spotted before.

The pre-school he goes to very smartly suggested staggering his home-time for the first few days, finally having him stay until “story time” after 4 days – which certainly helped to ease him in, and is definitely a tactic I’d recommend if you get the chance. I think I’d like to take that approach each time I return to work after a holiday, to ease me back in! :D

Yesterday I took the day off work, so I had the opportunity to drop him off and walk him into school myself for the first time – a nervous experience in and of itself, so I can certainly see why he would be nervous. But I was very relived to see he had already settled in nicely, knew where everything was and had even made a few friends.

I was probably overly worrying for the little chap to be honest, though I still find the thought of starting your educational career very daunting. For the next 13-18 years, his daily life will be dictated mainly by a system mostly out of our control, as will our holidays, weekend plans and house-moves. The holiday part is less of an issue – being married to a teacher has restricted us historically anyway. But the planning involved in house-moves to get in to certain catchment areas frankly boggles my mind.

Still, however this big journey of his pans out in the long run, at least it’s started reasonably smoothly. I can’t ask for much more than that I suppose!