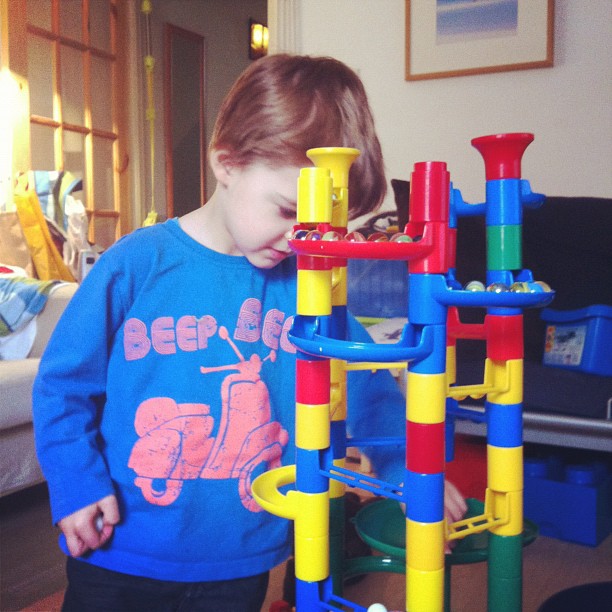 Well, after over 9 months dreading it, the day has finally come for my wife to step back in to her other job. She isn’t going back properly until mid-April, but her school (and I suspect many other industries) offer returning-to-work mums the ability to take a number of “Keep in Touch” days throughout their maternity leave, and that’s what she’s doing today.

All together Sara will be taking 5 of these “KIT” days before she returns properly, and because our full-time care arrangements for the boys don’t officially begin until that point, I’m taking 5 days off work (over the next 4 weeks) to look after Robert and Freddie on these days.

Nothing particularly out-of-the-ordinary there, and aside from my inability to breast feed (which could cause some fractiousness with the younger child by the afternoon!)it SHOULD be relatively straight forward. But it’s the first time I’ve been properly left in charge of both children for the day, so it’s going to be a bit of a test of my patience I suspect.

Since it’s going to be such a new experience, I thought I’d try to document some of it for posterity’s sake. I’ll probably update this post a few times today – though I doubt it’s going to be very interesting for anybody really. It’s not like I’m live-blogging the football results or something…! But it will amuse me, at least.

5.30am – The day starts a little earlier than normal, with Freddie being a little bit sick after his only night-time feed. The early start is probably a blessing in disguise though, as our morning routine is going to be a lot different once we’re both back at work. Apart from a few tears from Robert when we discuss why Mummy is going back to work, things seem to be going reasonably smoothly so far.

8am – With no major upsets along the way, after quickly trying to get as much milk in to Freddie as possible, Sara leaves for work. My job officially begins!

8.20am – Having coraled both children in to their rain coats, brushed teeth and got bags ready, we set off for pre-school, where Robert spends his morning. Thankfully, a grizzly Freddie falls asleep in the car.

8.30am – Having done the pre-school drop-off numerous times before, I manage this task relatively successfully – though doing it in the rain does present a few tricky obstacles. Robert is now safely ensconced in somebody else’s care for the morning though, so Freddie is my only task.

9am – Despite my wife’s assurances that Freddie would probably now stay asleep for a couple of hours, giving me plenty of time to do some chores, Freddie is currently (as I write this) making quite a bit of noise in his cot upstairs – he clearly doesn’t want to be there…! So it may be time for the first plan-change of the day…

9.45am – With Freddie wide awake upstairs, it’s becoming quite clear that he’s not going to play ball. Time for a strategy change! With 90 minutes left to kill before picking up Robert, I decide to take Freddie with me to Tesco so we can do some ad-hoc shopping.

10.45am – Shopping was a success – Freddie is in a delightful mood, we managed to get some good Mother’s Day presents and even some delicious food for Sara’s dinner, after what will invariably have been a tiring day for her. It’s at this point that I realise just how stressed I feel – not in an immediate way, but in the “foreboding dread” type of way. I can deal with pretty much every situation the kids might throw at me, except one: the breastfeeding. The dread I feel is linked to the knowledge that, at any moment, Freddie could turn in to a big screaming blob, wanting what I can’t give him. Hey ho…

11.05am – Shopping all sorted, I’m now sat in the car outside Robert’s pre-school, feeling surprisingly relaxed. Freddie has finally fallen asleep in the back, and I’ve got 15 minutes of free time to sit and listen to Radio 2. Maybe today might be okay after all?!

11.30am – Having collected Robert, it becomes clear to me how much Freddie reacts to Robert’s presence – without even trying, Robert seems able to entertain Freddie with just the slightest movement or noise. Suddenly I feel very relieved to have them both back together – and Robert is VERY happy to see me again, which is a nice bonus.

12.35pm – Lunch went very well – Freddie ate everything I gave him, and drank a fair bit of water too. Hopefully that will stave-off any thirst pangs he might be having! Robert was a little monkey as usual, insisting on building a Lego model while we ate, but he ate most of what I gave him so I can’t really complain. We’re now all sat having a play in the lounge…

14.15pm – Having sat watching Cbeebies and playing with some toys for a while, I finally got Freddie in to bed about 10 minutes ago, where he is now fast asleep. Finger’s crossed, he should now stay asleep until Sara gets home, meaning I’ll have made it through the day with no major incidents! Robert and I are now building Lego models and watching Mr Bloom’s Nursery…

Maybe this staying at home lark isn’t quite as scary as I imagined it might be..?

3 thoughts on “Fatherhood²: A Day in the Life of a Stay-at-home Dad”