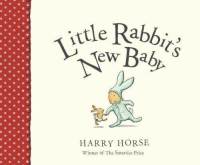 As I sit here on the eve of both Robert and Freddie going in to whole-day care/education, I thought it would be a good time to post the follow-up to my post “A Children’s Book for Ever Life Lesson“. After I published the last post, lots of you were kind enough to suggest books which fit the bill – though I’ve still got a few gaps, so I’d welcome more suggestions!

I’ve not read every one of them, so I’m going to just post the book details as supplied on Amazon – you can make up your own mind! I’ve also credited the people who made the suggestion…

Pirate Pete’s Potty / Princess Polly’s Potty
“Follow Pirate Pete as he swaps his nappy for big boy pants and begins to use the potty for the first time. Clear, practical text and engaging illustrations help to counter many of the anxieties both children and parents may feel during potty training.”

The arrival of a new baby in the house

Little Rabbit’s New Baby
“Little Rabbit is very excited at the thought of being a big brother. However, when Mama has three babies, instead of the expected one, things don’t go as smoothly as Little Rabbit had hoped. Perhaps babies are not as much fun as he first thought! But Little Rabbit’s new siblings adore him and when Little Rabbit is the only one who can get them to sleep, he realizes how special it is to be a big brother. A very poignant tale, full of humourously familiar moments for any family expecting a new baby.”

The Kissing Hand
“In this contemporary classic, Chester Raccoon seeks love and reassurance from his mother as he ventures out into the world to attend his very first day of school. The audio CD includes a reading and an original song. Full color.”

Billy and the Big New School (suggested by Katy Oakes)
“Billy is not at all sure about starting big school. In fact, he wishes he could stay at home with his mum. But with some gentle encouragement and the help of a new friend, Billy soon discovers that big school can be a lot of fun! Young children and adults alike will enjoy sharing and talking about this much-loved classic picture book, with its delightful and amusing insight into the joys and trepidations of starting school.”

Death of a loved-one or pet

Love You Forever (suggested by Alexandra Goldstein)
“The mother sings to her sleeping baby “I’ll love you forever, I’ll love you for always, As long as I’m living my baby you’ll be”. She still sings the same song when her baby has turned into a fractious 2-year-old, a slovenly 9-year-old, and then a raucous teen. So far, so ordinary–but this is one persistent lady. When her son grows up and leaves home, she takes to driving across town with a ladder on the car roof, climbing in to her grown son’s window, and rocking the sleeping man in the same way. Then, inevitably, the day comes when she’s too old and sick to hold him, and the roles are at last reversed. Each stage is illustrated by one of Sheila McGraw’s comic and yet poignant pastels.”

Goodbye Mog (suggested by Katy Oakes)
“Mog was tired. She was dead tired…Mog thought, ‘I want to sleep for ever.’ And so she did. But a little bit of her stayed awake to see what would happen next”

Going on holiday or travelling somewhere

Topsy and Tim (various titles) (suggested by Carl Purkins)
“Topsy and Tim are always finding fun adventures in the real world, and this story is reassuring for young children having first experiences of their own. In Go on an Aeroplane share Topsy and Tim’s aeroplane adventure as they meet the stewardess, the pilot. Also, learn all about the airport and discover that sucking sweets can stop little ears from popping! A trusted and well-loved pair who can help guide parents and children through ‘first experiences’, Topsy and Tim books have been beautifully updated with contemporary artwork. Topsy & Tim remain instantly recognisable to parents while in a fresh style that will appeal to a new generation of fans. Re-launching in April 2008 with the bestselling titles Learning to Swim, The New Baby, Start School, Go on an Aeroplane, Go Green and Have a Birthday Party these wonderful books deserve a place on the bookshelves of the next generation.”

Going to the doctors / hospital etc

Miffy in Hospital (suggested by Katy Oakes)
“A welcome new edition of this basic preparation book. Miffy still must go to hospital, but mum goes along too and the nurse is very reassuring. While the old edition had Miffy’s tonsils coming out, this new one could be an operation for almost anything – useful in an age when tonsils are not so regularly removed. The operation is also an emergency this time.”

The basics of ‘right’ and ‘wrong’

Angry Arthur (suggested by Jess Evershed)
“Once there was a boy called Arthur, who wanted to stay up and watch TV, but his mother wouldn’t let him. “I’ll get angry,” said Arthur, and he did. Very, very angry…”

We are Wearing Out the Naughty Step
“We are wearing out the Naughty Step – I lost the school hamster, and Josh fed the elephant the wrong way and we made the dog into a panda… Mummy is not happy… but the day she makes Kevin a chocolate birthday cake is the day that ALL of us, including Mummy, end up on the Naughty Step!”

Rude Mule (suggested by Katy Oakes)
“What would you do if a mule knocked on your door one day and said, “I’ve come for lunch”? You’d say, “Hello! Come in, Mule.” But what if the mule was badly behaved? Find out how a quick-witted little boy teaches an obstinate mule some manners in this funny, touching picture book. With repetitive dialogue and mule noises to make, this is a great book to read aloud.”

No More Bottles for Bunny (suggested by Tina Frostholm)
“Ducky and Piggy are having a tea party with their younger friend Bunny. But Bunny can’t join in the real fun because he won’t stop sucking on his bottle. Ducky says she will be the mummy, Piggy says he will be the daddy and they ask Bunny to be the baby because he has a bottle. But Bunny doesn’t want to be the baby and stops sucking and starts to drink from a cup to show what a big boy he really is.”

Don’t Worry William (suggested by Claire Gaskarth)
“It’s a dark night. A night for naughty bears to creep downstairs. Horace and William need biscuits to make them brave so they sneak downstairs. Then they hear a noise – a mum kind of noise. What will happen to the two naughty bears when mum finds they are downstairs, when they should be in bed?”

The Red Tree (suggested by Paul Higley)
“A small child awakes to find blackened leaves falling from her bedroom ceiling, threatening to overwhelm her. ‘Sometimes you wake up with nothing to look forward to…’ As she wanders around a world that is complex, puzzling and alienating, she is overtaken by a myriad of feelings. Just as it seems all hope is lost, the girl returns to her bedroom to find that a tiny red seedling has grown to fill the room with warm light. Astonishing Australian artist, Shaun Tan’s latest creation, The Red Tree, is a book about feelings – feelings that can not always be simply expressed in words. It is a series of imaginary landscapes conjured up by the wizardry of his masterful and miraculous art. As a kind of fable, The Red Tree seeks to remind us that, though some bad feelings are inevitable, they are always tempered by hope.”

Topics with no suggestions (yet!)

Safety when out and about / on the road

Being picked on by other children

2 thoughts on “Fatherhood²: A Book for Every Life Lesson – Part 2”