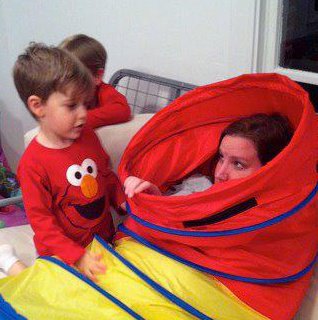 ‘I’m still funny. I’m still creative. I’m still kind of hip. I’m still sane.’ This is the mantra I have been repeating to myself for the past three years. The past three years have seemed long and short at the same time. The day they were born was the best and most stressful day of my life. Their development through these years has lifted my soul to the highest heights and weighed on my mind until I thought it would sink into the deepest depths of worry and frustration. Some folks (me included) never know what feeling two opposite emotions feels like until you have kids.

Not to bore with a long story, but I have to step back in time a bit. I never thought of being a mom that much. To be honest, I was getting used to the idea of having a career and being happy with that. Things changed when I met my husband. I was pretty late to that game in comparison to my friends and colleagues. We were married when I was 31. Then I found out the whole biological clock thing isn’t a myth. It’s real. It sucks, and it will hound the crap out of you until you listen to it.

We started almost two months after our wedding trying to build our little family. We had no reason to think things weren’t going to be easy. We thought that within a few months we would have happy news to share with our families and friends. One year, then almost two years went by and we knew things were not going to fall into place naturally. After lots of unhappy medicines and two rounds of the medical equivalent to a turkey baster, we got the phone call we had been waiting on. I went in the next week for my first ultrasound. One small little bean with a beating heart showed up on that screen. I smiled and knew everything was going to be ok. That was BT…before twins.

Our first three ultrasounds had shown a beautiful little tadpole growing and thriving. The next ultrasound changed everything. “Ha!” my mom and I laughed at the sweet, funny ultrasound tech as she asked if twins ran in our family. My mom said “that’s funny.” The tech took a somber look and quickly said, “I don’t joke about that kind of thing. Look on the screen.” For the first time in almost two months I was speechless about the pregnancy. I had been giddy and excited and probably blabbered on to anyone who would listen to the fact that I was finally having a baby. But now faced with a black and white screen looking at a lot of garbled shadows and light, the tech put a finger to the screen and pointed out two very distinct little babies. Baby A and Baby B.

And that wasn’t even half of the shocks we were in for over the next few months. Within a half hour of getting the shock of my life from the ultrasound tech, my obstetrician dug my stress hole even deeper when she looked at the ultrasound pictures and gently broke the news to me that my twins were most likely mono/mono. Ok, and that should mean what to me? Turns out I had a lot of twin pregnancy education crammed into my mind in a very short amount of time over the next few weeks. Mono/mono meant that the twins were in the same inner and outer sacs. This was not good as the mortality rate for mono/mono twins was 50%. Twins being the same inner and outer sacs meant that the chances of their umbilical cords getting wrapped around each other either during the course of the pregnancy or during the birth was extremely high.

This news took it’s toll on me and my husband for three long worrisome weeks until we had our first appointment with a perinatologist. Due to my age (I was 34 at the time), and the fact that my regular obstetrician suspected we had mono/mono twins, we now had to start seeing a high risk obstetrician. And was she a joy to see. By the end of everything we came to label her and her partner, Doctors Doom and Gloom. We went through the joys of suspected twin-to-twin transfusion syndrome (don’t ask me to explain that one unless you have an hour or two to spare) and being told a few weeks before Christmas that the smaller of the twins would most likely ‘succumb’ within days. It was like getting a card saying “Merry freaking’ Christmas from Doctors Doom and Gloom!”

Turns out after months of physical and mental stress, our little baby B had IUGR, intrauterine growth restriction. It meant his umbilical cord just wasn’t as strong as his brothers and didn’t get as many nutrients, etc. to him to grow. He just stopped growing long before they should need to be born. So after a long week’s of hospital bedrest and when I officially hit 28 weeks of pregnancy, our little baby A (Andy) and baby B (Will) were born via c-section three hours before Valentine’s Day on a lovely Friday the 13th. Andy was born first weighing in at a hefty two pounds and thirteen ounces, and Will was one minute behind him weighing two pounds and three ounces. They screamed. It was awesome. I can’t put into words the depth of my worry about not hearing them scream being born so early. Their little kitten-like screams were the sweetest sound in the world at that point. I wanted to cry so bad, but the epidural they gave me was so unbelievably strong, I couldn’t form tears. I could hardly swallow, and all I could do was say how beautiful they were before the teams of nurses and doctors rushed my boys to the neonatal intensive care unit.

The next several weeks were long and excruciating while the boys were in the NICU. I remember reading an article that appeared in the New York Times about parents that had to spend an extended period of time with their children in NICUs having developed PTSD, post traumatic stress disorder. Before this experience I would have doubted that theory. I fully believe it now. To this day, I still can’t help but react when I hear a beep or blip that sounds like the NICU monitors going off. I can’t watch the baby stories on television that detail NICU struggles in any form or fashion. My stomach gets knotted up when I hear an alarm that sounds like the apnea monitors they sent us home with for a few months. I don’t claim to have the same level of reaction that war veteran would have at all, but I can see how the sights, sounds and even smells linger in your brain forever when exposed to that kind of worry and stress in a particular location for a long span of time.

Jumping to present day, we couldn’t be happier with how our little monkeys have grown. They are on target for everything: height, weight, mental development and driving us insane on a daily basis. The main challenge we are left with is a few food issues for our little Will, but with feeding therapy we are hoping to overcome that soon. Having two three year olds is an adventure. That’s what I feel I’m supposed to say. That’s what I tell other twin parents that walk up to us in the store and ask if their little tiny infant twins will be a handful when they are our boys’ age. “Oh, it’s fun! You’re never bored!” I say and walk away quickly before my smirk and giggle are noticeable. What I don’t tell them is the fun and adventure are only part of the experience. There are lots of tears (both child and adult), lots of screams (mostly child, but a few adult ones on the rare occasion said child and/or children decide to pounce on you and ensure that neither mother or father is capable of having future siblings), lots of whining (I wish I could say all child here), lots of laughs (both sides equally), and lots and lots of hugs, kisses and cuddles.

As this blog entry is already a novel, I will save the ‘life with twins/crazy times with two three year olds’ stories for another entry. A few things that I have learned from my experience with twins are as follows: I will never be on time for anything again until they move out. Life is too short to worry about spilled milk, spilled juice, spilled applesauce over expensive upholstered furniture, or boogies rubbed on walls. Having identical twins isn’t as confusing as society would have you believe, except when you try to tell them apart from the side or back. I am stronger than I think I am (most of the time). Kids are weird. Twins are weird. Life with identical twins is weird, but I wouldn’t trade a minute of it for anything.

Tina Frostholm is mother to identical twin boys, Andy and Will. She resides along the sunny, hot and humid Gulf Coast of Alabama, USA where she is a freelance graphic designer and owner/designer of her shops, First Frost and Frostiki.