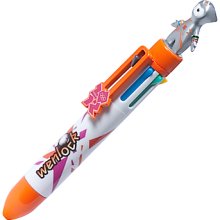 As most of you will know, I don’t really review that many products – not through lack of trying mind you, but simply because I don’t seem to be on enough marketing folk’s radars yet. So when I DO get asked to review stuff, I usually jump at the chance.

Cue an email from the PR company looking after ‘Golden Bear’ and their Olympic soft toy line, asking if I would review their Wenlock stuffed toy (and a very jazzy Wenlock 8-in-1 pen) – so as promised, I jumped at the chance.

A few days later and the toy arrived – and you can see it below. But this was where my problem arose: How exactly do you REVIEW a soft toy? I mean, it doesn’t really DO anything – apart from being extremely soft, looking like what it’s supposed to and being huggable. What else is there to review? So, in an attempt to do my best, here’s my review:

It’s very soft. It looks exactly like I imagine a Wenlock mascot soft toy would. My son loves it, and already has it purched on the end of his bed. And… er… I especially like the fact that it’s feet are weighted, so that it stands up without falling over. That definitely a plus – more toys should do that.

The pen is nice too. It writes – in 8 different colours. My son has also taken it on as his own, and is happily scribbling away with it on a regular basis.

So… there we have it. They’re nice! If you’re looking for a piece of merchandise themed around Olympic mascot Wenlock, you could do a lot worse than these.