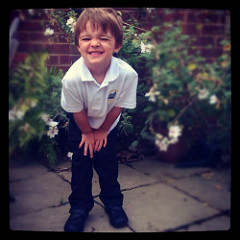 Well, today marks the end of Robert’s first week of school (I know it’s Monday – he started on a Tuesday!) and I’m pleased to report he seems to be enjoying it MUCH more than he had previously been imagining.

Having said that, he certainly *hasn’t* got used to getting ready for school in the morning yet, protesting “I don’t want to go to school today” on a regular basis. But his mother gets like that at least once a week, so I guess we can’t expect miracles this early…!

Despite the miserable pose he struck in the photo that accompanied last week’s post (“Fatherhood²: Hi Ho, Hi Ho, It’s Off to School we go…“) his first day went relatively smoothly – and the rest have followed in a similar vein, with only a couple of minor hiccups along the way. Here are a few of the highlights from week 1:

So, there we have it – end of week 1 and basically, there’s not much to report. Which I’m taking as a good sign…!