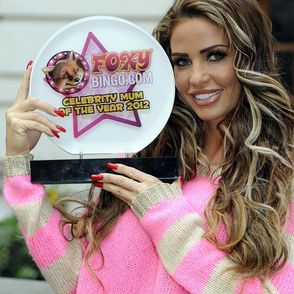 In what has become a highlight of absolutely nobody’s year, the announcement of the shortlist for “Celebrity Mum of the Year” was made today – and this year’s shortlist is another cracker. Amongst the names on the Foxybingo-sponsored list – a list apparently made up of “the most inspiring celebrity mums” – are perpetual favourites Katie Price, Victoria Beckham, Colleen Rooney and Amanda Holden.

Nobody knows quite what goes on behind the doors at the “Celebrity Mum of the Year” awards judging – the process is one of the industry’s most closely guarded secrets. But the following is a small sample of the tasks the celebrity mums are rumoured to be asked to complete:

The paucity of talent in that list is one thing, but what really got my goat when browsing through the list was the inclusion of the following women: Fearne Cotton, Kate Middleton and Sarah Storey.

Now don’t get me wrong – I’m not questioning any of those three women’s parental abilities – they may well be excellent mothers… WHEN THEIR CHILDREN ARE BORN! Yep, all three of those celebrity “mums” are currently pregnant with their first children –

so how does anybody in the world profess to have any knowledge of how inspirational they are as mums?!

Don’t worry though dads, us men aren’t left unrecognised – the “Celebrity Dad of the Year” awards are another regular fixture on the awards calendar, and the winners on that list provide even more inspiration to us than the women. Last year’s winner was pop star Gary Barlow, who pipped previous four-time winner Peter Andre to the title in a tightly-fought “battle-of-the-dads”.

Whilst I suspect I’ve probably put more thought in to this post than the entire nomination/judging panel of these awards have done in over a decade, I hope I’m not the only one who is insulted by this sort of award.

Should the average, hard-working parent really have these “celebrities” representing the apparent pinnacle of success in parenting? Can’t we all revolt and force them to choose some actual deserving people?

6 thoughts on “Fatherhood²: Are Celebrity Parenting Awards an Insult to Regular Parents?”