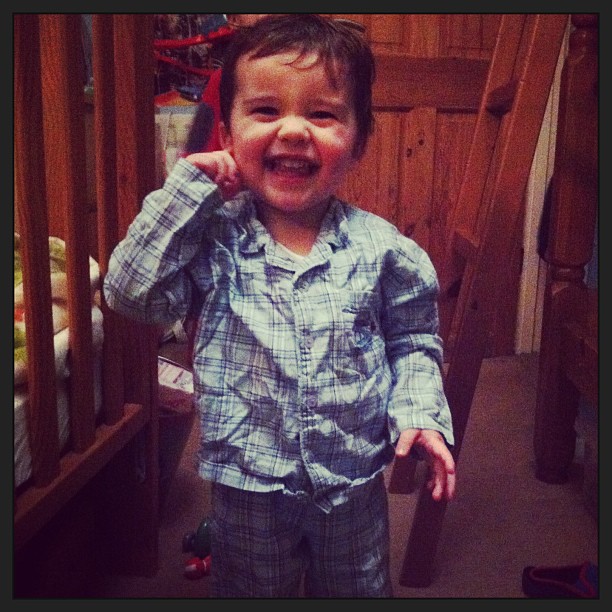 Most of the best cliches are usually borne of the truth – especially the one I’m currently saying to myself on FAR too regular a basis: Kids really do grow up too fast. It seems like only yesterday that I started this blog, preparing to become a father for the second time.

Fast forward two years and that little bump in my wife’s tummy is now walking, talking and growing up WAY too fast for my liking. There’s some cute proof up there on the right of this post – Freddie getting ready for bed last night, modelling his first pair of pyjamas. Up until this point he has been happy in his sleep-suit and sleeping bag, but watching Robert getting in to his big-boy pyjamas every night has clearly had an effect on him, and he toddled over to the draw and pointed at the pile of pyjamas.

So it was with a mix of excitement and a heavy heart that Sara dug out the pyjamas for his size and let him put them on. And BOY was he pleased with himself!

It won’t be long until he’s too big for his cot (even his cute John Lewis baby crib seems like a lifetime ago!) and crossing over to the bunk-bed that we recently bought (in preparation for that big day) which his big brother is currently loving. At least that milestone will come with a silver lining – getting rid of the cot will free up quite a bit of room in their tiny bedroom, so everyone will be pleased by that.

I know I sound like an old lady when I say this, but to all the parents of newborns and small babies out there: make the most of that magical time! I know it might seem like an endless slew of nappies, feeding, screaming and general sleeplessness, but… actually, scrap that – the newborn days are pretty tough. But the time from 6-months to 18-months is pretty magical. Make the most of that. *ahem*

Oh whatever, you know what I mean.