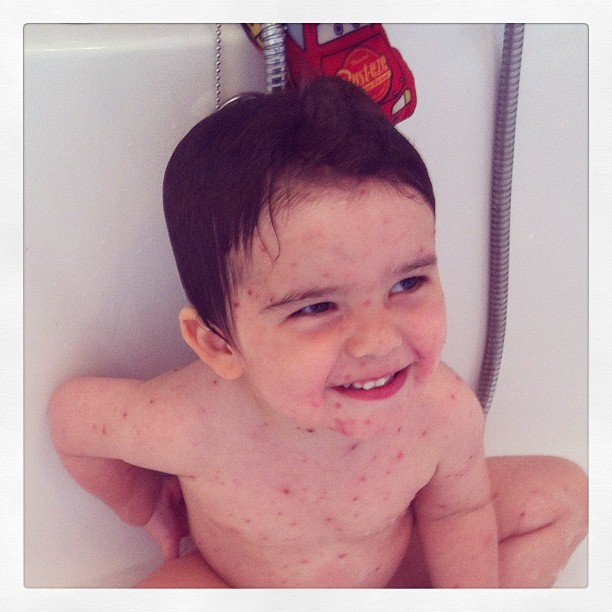 A couple of weeks ago, I wrote a post about our experience with Robert contracting chicken pox while we were away on holiday in the Isles of Scilly. Whilst I appear to have been fairly realistic about Freddie’s prospects of catching it too, my buoyant mood clearly gives away how lightly I thought we’d gotten off.

In typical fashion, I definitely spoke too soon – pride before a fall and all those other cliches. No sooner had I hit ‘Publish’ on that post, Freddie began to display his own collection of pox-spots – and boy oh boy did he have a LOT of spots.

As you can see from the photo above, poor Freddie seemed to get chicken pox about 5 times as bad as his brother did – he was covered from head to toe in itchy little blotches, and the remnants are still sticking around today – over two weeks later.

Thankfully, whilst he seemed to gain hundreds and hundreds of spots, the little champ fought through it all with the resilience of a man ten-times his age – a few scratches here and there and a couple of days where he was feeling pretty grumpy (and who can blame him?!) but he coped remarkably well.

I must admit, I was rather surprised by quite how badly Freddie contracted the pox – I guess Robert’s own dose and subsequent quick-kicking of it had made me assume Freddie would get it the same way – or maybe even to a lesser extent. But unfortunately it wasn’t to be.

The difference in their suffering may well be due to something that Sara and I have suspected for a while: namely, that Robert may well have been OVER-exposed to chicken pox in his short life, and might well have begun to develop at least a little immunity to it before he contracted it fully. Until the point we spotted the first little batch of red marks on his back 3 weeks ago, we’d been amazed that he HADN’T yet had chicken pox – several of his friends and playmates had had chicken pox around Robert in the past few years, and we’d begun to wonder if perhaps he was some sort of pox-fighting X-man. But thankfully (sadly?) my eldest son ISN’T a mutant…

As you can see from the photo below, Freddie didn’t let his ailments get him down too badly – he’s maintained a happy demeanour and cheery disposition throughout most of his ordeal, which is a big relief for his parents. And the good news is, his spots have ALMOST all gone now, so we should finally be on the down-hill section of this fun ordeal…