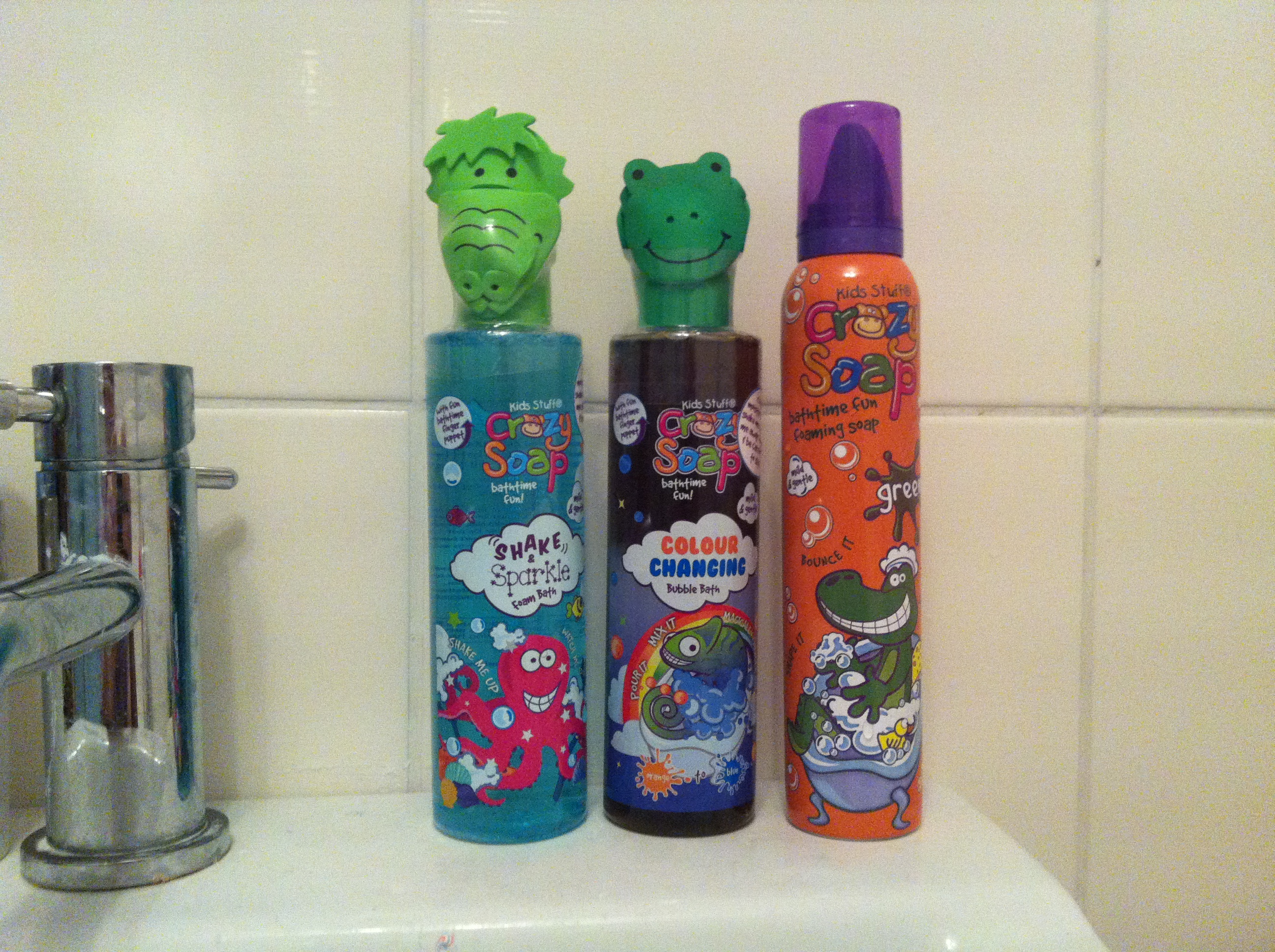 I was recently contacted by the lovely folk at “Kids Stuff“, offering to send me some of their Crazy Soap bath products to try out on the kids. Whilst we usually stick to Johnsons “no more tears” products for our bath-time bubble provisions, I certainly have nothing against other bath products. If anything, we buy the baby stuff out of habit – and since neither of mine are babies these days (sadly!) we’re probably due for a change anyway.

So, we graciously accepted, and a few days later the bottles you can see on the right appeared through our postbox.

We’ve had them for a few days now, and have thoroughly tested (well, as much as anybody CAN ‘test’ a bubble bath!) all three. So here’s what I – and more importantly the kids – think of them:

Here’s what the PR blurb says about it: “foaming fun that magically changes colour – it’s orange in the bottle but turns blue in the water – with a bath time frog finger puppet.”

Here’s what we thought: Whilst I’d disagree that it’s orange in the bottle (it looks more brown to me!), it certainly does what it says on the side – changing from an orangey-brown in bottle form to bright-blue when it hits the water and turns into bubbles. That’s pretty much it in a nutshell – the blue was pleasant, the bubbles were luscious and it all disappeared when you took the plug out. I can’t ask much more than that from a bubble bath really!

Here’s what the PR blurb says: “a magical foam bath that fills with glittery sparkles when the bottle is shaken with a fun crocodile finger puppet. Perfect for Christmas – OH NO it’s nearly Christmas!

Here’s what we thought: Robert was less impressed with this one, though I suspect that was mainly due to a misunderstanding of what it would deliver. In a nutshell, there are sparkly-bits in the bottle which look pretty when you shake it. When you put it in the water, it does exactly what it’s supposed to and forms bubbles. When I asked Robert what he was HOPING it would do, he explained that he thought the bubbles would sparkle (which, to be fair, most bubbles do anyway!) and that he would get “covered in sparkles and rainbows”. I did TRY to explain that the chances of that happening were pretty slim, but hey – he IS only 5. Either way though, it looks lovely sparkling in the bottle, and as with the previous example it makes lovely bubbles. Job done!

This product isn’t new like the other two, but they kindly chucked a bottle in with the bubble baths – and boy, was Robert pleased that they had! As you can see from the photos below, this stuff is disgustingly brilliant.

The people who sent me the bottles have offered up a pair of bubble baths for one lucky reader to win. To enter the draw to win them, just leave a comment below and I’ll pick a random winner at the end of this week. Easy peasy!