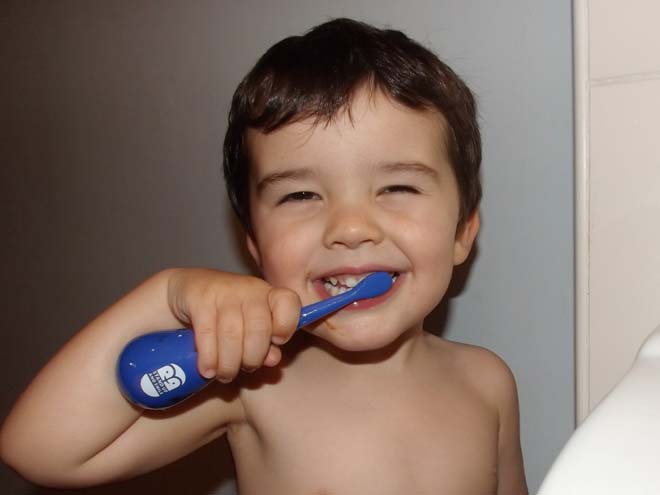 I was recently contacted by an inventor – not something you can say very often – who has created a brand new type of toothbrush. He has just launched the project on a crowdfunding site, and sent me one of his prototype brushes to road (or teeth!) test with the kids.

Reminiscent of the classic ‘Weeble’ toys from the 70s and 80s, the Rockabilly Kids toothbrush range have a rounded bottom (much like myself) so they never fall down – which my kids found very amusing. The brush itself is pretty standard (ideal for the 3-7 age bracket they are aiming it at) and comes with a removable head, meaning you can replace it without having to buy a whole new brush.

Both of my kids were keen to give it a try, but it was Freddie who proved the most smitten with the brush – having spent what felt like hours wobbling it around on the sink, they put it to the test with their pre-bathtime brushing – and the reviews were positive. Well, as positive as you can expect from a toddler anyway. Cries of “ooh, wobbly!” and “It’s very smooth” probably won’t make the poster quotes list, but they certainly reassured me that my kids would be happy to have one in future.

If you like the sound of the Rockabilly Kids brushes and want to get involved, head over to IndieGoGo and choose from one of the competitively-priced packages for backers. I shall certainly be putting my money where my mouth is come pay day, and I hope that a few of you will too.

Here’s a couple of shots of Freddie testing it out!