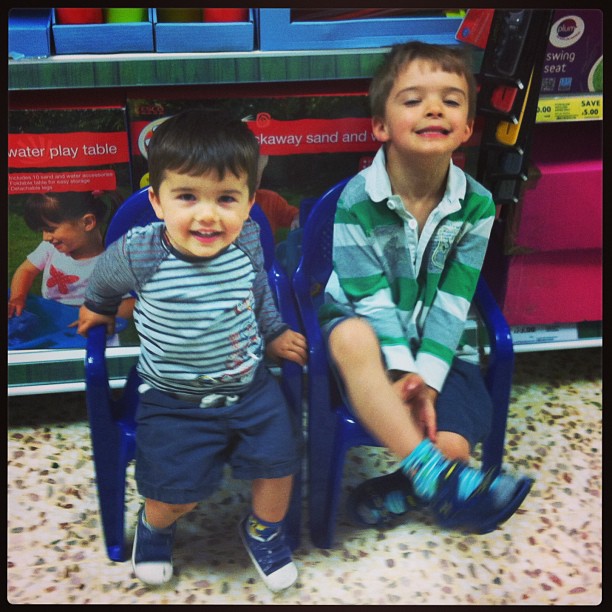 If you read my last post on the subject, you will know that my family is currently in the process of our first major house move. In exactly (well, hopefully!) one week’s time we will be moving in to our first new home in over 9 years, along with everything we own (again, hopefully!)

In my last post (“Fatherhood²: Getting Ready for the Move“) I explained some of my fears and trepidations about how the children were going to take the process, so I thought I’d provide an update on how things are panning out as we get closer to the big day.

Happily, despite the chaos that they are currently living in the midst of – a house half-packed, boxes everywhere, mummy and daddy constantly stressed or exhausted – both children seem to be coping quite well.

To say Robert (5) is excited about the move would be a major understatement. With just a couple of small exceptions, he has taken to move-preparation with great gusto. He spent over a week (in small doses) deconstructing all his Lego models – carefully ensuring he would be able to reconstruct them at the other end, naturally; He got incredibly excited when all our cardboard boxes arrived (he is insistent that we build a giant cardboard robot once we have finished the move!); And the slight upgrade in size which we will have with the new house has very much captured his imagination.

The only slight issue arose when I broke the news to him that, despite us moving to a three bedroom house, he would still be sharing a room with his little brother. We have chosen to do this for a number of reasons (mostly coming from me, I should probably clarify) but mainly down to how desperately sad Freddie would be if he were abandoned by his room-mate. Poor Robert burst in to tears when I told him, but we have promised him that their new room is almost double the size of their existing one, so we’re hoping he will quickly forget the idea of his own space and just be excited about his new surroundings.

Freddie (2) is a little more confused about what is going on, as anyone would be at such a young age. He’s getting caught up in the excitement of his brother, and appears to be relishing the idea of a new house. But the process of packing up all our stuff is confusing him – he seems to think that whatever gets boxed-up is getting thrown away, and watches with teary eyes when any of his toys get packed away. As I took his wooden farm house apart this afternoon, he looked sadly at me and declared “You broke my farm, Daddy. Why did you broke my farm?”. Poor chap!

One thing everybody told us after my first post, though, was that you have to ensure the kids are part of the process or they’ll find the whole thing quite jarring. With the exception of the move-out day itself (when Robert will be happily sat in school) they have been (and will be) exposed to the whole process, so I’m hoping this should make things easier in the long run.

Having said that, we’ve had several major setbacks in the actual house sale/move process so far, so I’m not expecting it to run very smoothly to be honest. Hopefully, if things DO carry on being stressful, our decision to make the children part of the process won’t complicate things TOO much. Fingers crossed, in a week or two’s time (depending on when our broadband gets reinstalled!) I’ll tell you all about it…!

2 thoughts on “Fatherhood²: STILL Getting Ready for the Move”