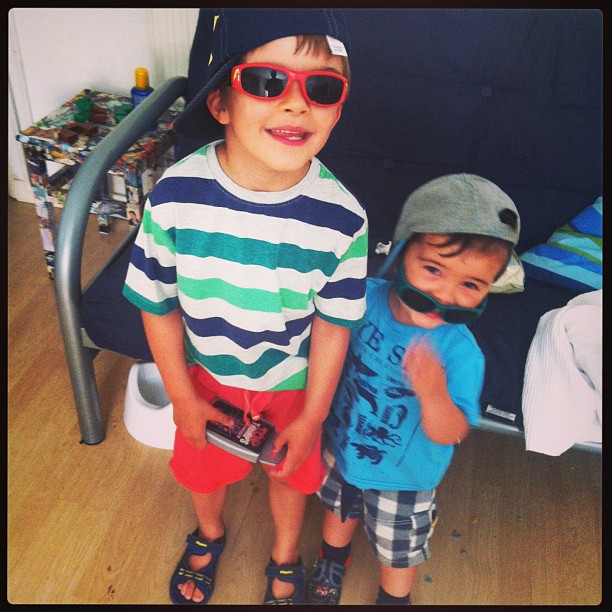 As parents, we’ve always strived to bring our children up as good people. We teach them to be polite and courteous (you have to see Freddie’s “oooh, amazing!” Christmas present reaction – it’s foolproof!), we teach them how to be nice to others – we teach them all the stuff we believe you need to be a good person.

Despite our best efforts, one particular lesson has so far evaded us – how to be a good sportsman. Or more specifically, how not to be horribly arrogant winners and horrendously poor losers.

Obviously, Robert is the main culprit here – though Freddie is learning well from his older brother.

It’s a problem that I’ve known about for a while, but it struck me just how bad it is today during a family game of Mario Kart on the Wii console.

Whilst Sara and I were playing the game, Robert and Freddie were sat on the sofa cheering along – alternating their allegiances between us depending on who was winning at the time. But once Sara started to clearly win, Robert (as usual) started to gloat on his mother’s behalf. So a conversation along the following lines took place:

Robert: “Mummy is gonna win! She’s WAY better than you!”
Me: “Robert, it’s not nice to mock somebody when they aren’t good at something”
Sara: “How would you feel if you had a race at school and you lost, and another boy laughed at you?”
Robert: “I ALWAYS win the races at school!”

As you can see, Robert isn’t a gracious sportsman – and he’s even worse when he actually DOES lose. Whilst we’ve always sought not to give the kids an unrealistic view of competition, inevitably you sometimes let them win. After all, who can honestly say they can play Connect 4 or Snakes and Ladders with a 2/3/4 year old and NOT let them win the odd game? But we try to let him lose just as many as he wins, as I’m sure most of us do.

So we’re now facing the task of figuring out how exactly you turn a child into a gracious sportsman, before he starts to show this amazing arrogance in competition with other children – children who are likely to take his gloating a lot less graciously than we do.

I’m assuming it’s just going to be a matter of continual reminders on top of some ‘live’ demonstrations – but if anybody knows of a more effective way of making teaching this lesson WITHOUT the inevitable tantrums our method will cause, I’m all ears…

After all, I don’t want him to turn in to this: