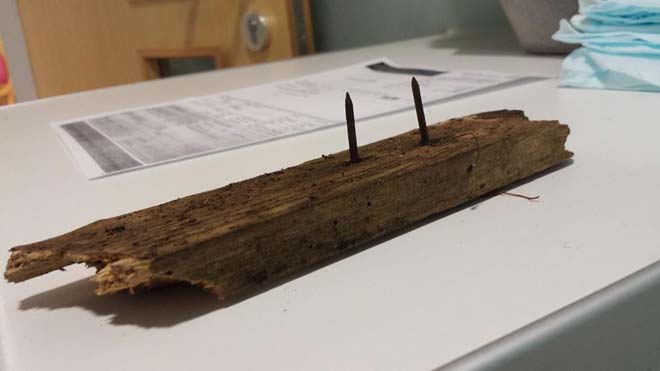 As I’m sure the title has probably told you by now, today saw the Elliss family taking their first trip to A&E – and Robert was the lucky recipient of the attention.

It all started this afternoon, on what was turning out to be quite a satisfying yet run-of-the-mill day. As it’s Robert and Freddie’s birthdays over the past/next couple of weeks, we’re holding a small family gathering at our house tomorrow for immediate family. You know the sort of stuff.

In order to prepare our new garden for the oncoming visitors, Sara and her mum had decided to do some gardening – and thus started a day of chopping, pulling, bagging and tidying. All was going very well, and we (well, they – I was busy doing prep inside the house) were almost finished so had taken a break for dinner.

After dinner, Sara’s mum and both children returned to the garden to finish off, and it was at this point that disaster struck.

Until today, our garden had been over-run with weeds, out-of-control plants and a few over-grown bushes. It also contains several broken trellises and some other random bits of wood – all of which had been left in disarray by the previous tenant.

One of these random bits of wood had found its way into the middle of the garden – presumably unearthed by the weeding – and Robert had decided to “bash it up”. You know, like kids do.

Bashing done, Robert (presumably – I’m working on his version of events here) discarded the wood and proceeded to swing on the underside of our slide. As he flipped himself round for the umpteenth time, he put his feet down and – BOOM – managed to place his croc-wearing left foot on said piece of wood. This wood (as you can see from the photos below) had two very rusty nails sticking out of it, and as you can probably imagine, these found their way into Robert’s foot, via the crocs.

Within 2 hours they were both back home, Robert looking crest-fallen while Sara looked relieved. Upon hearing the story of the visit to A&E, it turns out Robert was actually a very brave little boy – and developed quite a penchant for laughing gas, having to have it wrenched away from him by the end of the visit.

The aforementioned crestfallen look turned out to be nothing to do with the injury, and actually down to the fact that he was given a helium balloon for being a brave boy, which he subsequently let go of while hobbling to get into our car. Despite the fact that our house is currently home to several large party balloons, he wouldn’t cheer up until I promised him we’d go and buy him a new balloon tomorrow morning!

He’s currently tucked-up fast asleep in bed, hopefully recovering and recuperating from his ordeal – knowing children he’ll probably have forgotten all about it by next week. Unlike myself, who will doubtless be having nightmares about the vision of my infant son sat in his car seat, a small piece of wood attached to his foot. Hey ho, that’s parenting.

You didn’t think I’d finish the post without sharing a few gruesome photos, did you?! Check out the evidence below…