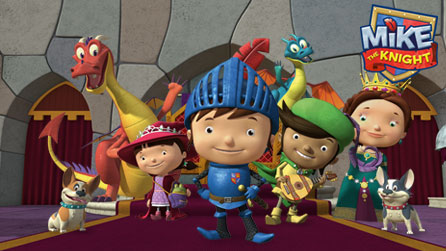 The following was written for the blog by my good friend Phill – I think (hope?) with tongue firmly in cheek. One thing’s for sure – Phill’s hatred of Mike the Knight knows no bounds… so you never know!

As a Dad with a young child, CBeebies has taken up residence in my life for the past 12 months. And whilst I’ve been enraptured by Rastamouse, sat open mouthed whilst watching Baby Jake and considered suicide at the prospect of another episode of Kerwhizz, I have noticed a more serious trend in the recent programming. Put simply, does CBeebies have a Tory agenda?

Let’s start right from the top. Arguably the single most marketable show on the channel is In The Night Garden. And Iggle Piggle IS David Cameron. Aside from the obvious physical resemblance, this is a show about a jumped up blue freak who wanders around an imaginary world populated by a set of dysfunctional, OCD, visibly privately educated friends.

This is just the tip of the iceberg however. The deeper you delve into the messages and morals behind some of the programmes, the more it becomes clear that this is a channel subliminally telling our children to get behind the Conservative party. Take Andy’s Dinosaur Adventure; is this an educational show teaching sprogs about the wonders of the Jurassic? No, it’s a show that consistently portrays the publicly funded museum as needing “outside assistance” to make its exhibits looks good. It is clear privatising propaganda.

Let’s look at Get Well Soon, a show that goes out of its way to undermine the NHS by having children attend the Hollywood smile of Dr Ranj with regularly timewasting disorders. A nosebleed? A grazed knee? A spot? It may seem to portray the doctor as a friendly, welcoming person to visit. But the reality is it will increase needless visits to understaffed, underfunded surgeries and only serve to undermine the delicate infrastructure of our National Health System.

The Cloudbabies are fascist dictators, whilst Postman Pat is a right wing knob jockey who flies around in a helicopter to deliver a single parcel (badly) on the tax payers money. Elsewhere we have Tree Fu Tom, an overt attempt to show Global Warming and Deforestation to be products of the Loony Left think tank and Raa Raa the Lion; a show about a mentally challenged, loud, blonde “leader” who gets want he wants by making the most noise and getting himself into increasingly more ridiculous situations. So Boris Johnson then.

Of all the shows that follow this right wing rhetoric, perhaps the biggest offender is the almost mythically odious Mike the Knight. Decked in Tory royal blue, Mike is a rich, over privileged little tosspot who makes the wrong decisions again and again and again before his friends finally help him out to save the day. Mike is exactly what the Government want you to see them as. They’re not shying away from their rich upbringing; they already know they’re better than the rest of us by virtue of their birth rank. They even know they’re doing a completely awful job at running the country. But it’s not their fault… it’s ours… and if only we all pulled together like Mikes myopic chums we could all make this country a better place for everyone.

The problem is getting worse. New shows like The Numtums pretend to be teaching our kids how to count, where in truth they’re teaching them that you will essentially be an outcast if you don’t find a faction with common goals and interests. Is this a fight we can win? Can we expect to hold the BBC and our government to account?

I’m not saying you all have to reach for your remotes and turn over to Peppa Pig right now, but next time you’re sat there with your child watching the saccharine sweet, colourful CGI monstrosity that is Everything’s Rosie, just think about what it’s actually trying to say about our ailing country. This blogger and parent is concerned. So much so that I’ve recently placed an embargo on CBeebies in our household and instead switched to teaching my daughter about the real world through the pure, crystalized magic of Walt Disney.

If only our government’s policies stuck in our heads with the same frequency as the theme tune to Driver Dan’s fucking Story Train… I’m sure the world might just be a better place for everyone.