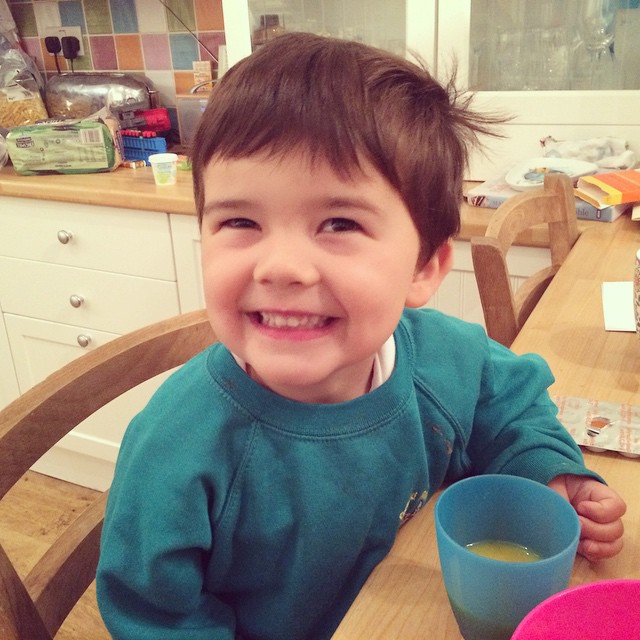 For instance, I think anyone who knows my children would be hard-pressed not to notice that my eldest is definitely the more sensitive one – with his younger brother being a lot more resilient and buoyant. There are numerous examples of situations where both have reacted very differently – and frankly, I don’t mind either ‘type’, as they both have their merits and their down-sides.

With that in mind, I’ve been surprised to witness a bit of a type-change from Freddie (3) in the past few days – and I’m not entirely sure what has brought it on.

Freddie isn’t usually a very big crier. He takes change in his stride, isn’t at all needy or clingy and will regularly dive into situations with both feet.

He started at nursery school 5 weeks ago, and the first 4 weeks were relatively event-free. He had a few grumpy moments in the first couple of days (with his nursery teacher taking great pains to tell us he was cross that mummy wasn’t there, rather than upset!) but after that he’s been fine.

Until this week, when he has suddenly become very anxious and clingy. My wife tells me he was very tearful today – something I witnessed at bedtime when he refused to go to sleep without me next to him. Where he’d usually happily take himself off to his room to play alone, he has been insisting on our (or his brother’s) company.

Last night he came into our bed at 2am (and proceeded to spend most of the night keeping us awake) – something he hasn’t done for months. He claimed he was doing so because he preferred our bed to his, but he was clearly upset about being awake in the middle of the night.

Whilst the obvious assumption would be that the separation caused by nursery is the cause (and it my well be), I can’t help wondering whether there is something else at play. Small children are so sensitive to external stimuli, it really could be anything – a TV show that has un-nerved him, something somebody has said or perhaps something we have done ourselves.

If you’ve ever experienced a sudden attack of the clings in your own child, I’d love to know what caused it – as this one has got me scratching my head a little…

1 thought on “Fatherhood²: A Sudden Attack of the Clings”