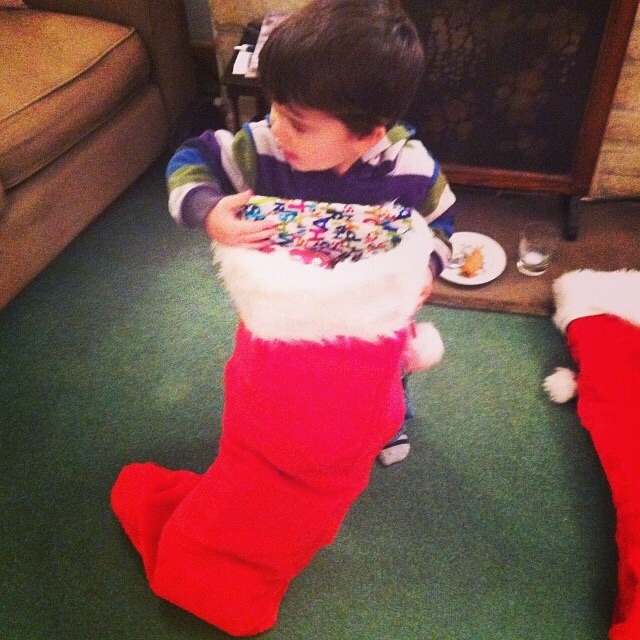 Being the certified, Christmas-loving parents that we are, my wife and I have already made significant headway with our Christmas present shopping. Stockings have been filled (purely for test purposes, obviously), presents wrapped and bags safely stowed away in the loft.

In our house, the story goes that Santa is the man in charge of filling your stocking, whilst family and friends are the ones who provide presents under the tree – i’m pretty sure this has always been the way in our young family, but it’s certainly a position we’ve cemented in the last few years.

However, it seems that Santa isn’t consistent in his approach, and looks to be catering to several different traditions depending on the house he visits.

I first started giving this serious thought when I spotted a friend’s status update on Facebook, light-heartedly complaining that parents do all the hard work only for Santa to take all the credit. Apparently, in her house the big jolly fella was laying claim to ALL Christmas presents.

This inspired me to ask what other friends were doing or had done when they were young.

Dozens of responses later, it seems like there are four main schools of thought, when it comes to Santa and his giving…

The first and seemingly most common is similar to our own. Namely: Santa takes care of the stocking while family take care of the bigger presents. A slight variation on this one sees Santa also laying claim to one big present too.

The second sees Santa taking care of ALL present giving – apart from stuff coming from outside of the immediate family, one would assume.

A third, slightly less-popular approach sees Santa laying claim to any gift which had been requested on the child’s letter to him (within reason, I hope!) while the family take credit for any off-piste, unexpected present giving. It seems odd, but it actually makes a lot of sense I guess – though you’re scuppered if your letter to Santa contains pipe dreams and unicorns!

The final approach, which came up a lot more than I would have ever imagined, is that Santa takes responsibility for the supply and delivery of the child’s present, but the parents are funding his efforts with money and instructions. I’m guessing this one came about as a result of the very quandary my Facebook friend was bemoaning – though personally, the idea of a Direct Debit to Santa seems a little… weird. But hey, each to their own.

While discussing these different approaches with some colleagues and friends, I was amused to hear that one work colleague (brought up in the States) had apparently received the much-threatened but rarely seen “lump of coal” in her stocking once.

Apparently, after a particularly badly-behaved year, Santa left the coal along with a note threatening further punishment if she didn’t clean up her act – though luckily her parents still brought her presents, to soften the blow. I guess making Santa the bad guy can be just as effective!

In researching these different Santa strategies, I’ve not heard anything to persuade me that our own approach Isn’t the simplest solution – but it’s really interesting to hear so many variations on the theme.

How did Santa work in your house – let me know in the comments!

1 thought on “Fatherhood²: Is Santa Taking All the Credit in your House?”