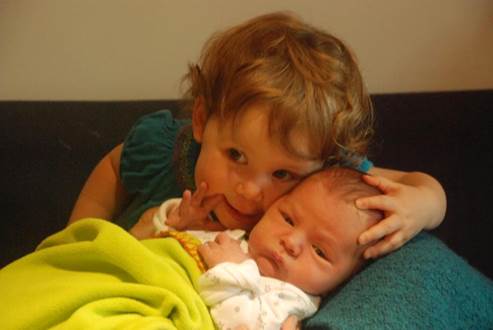 I don’t write about my children often. I love sharing pictures and amusing stories, but when it comes to anything serious I was always conscious of coming across as one of those people who either never shuts up about their kids, or would imply that a certain method of parenting is better than another.

But I’ve been asked by a few people to write something about my experiences with two children as opposed to one, and was running out of sarcastic excuses not to. So here goes.

I have two daughters aged 2 years and 4 months (Jess). And 4 months (Abby). Despite very little planning on either occasion, they inexplicably share the same birth date of the last day of September. So is having two much more difficult than having one? The short answer is both yes and no.

On the one hand you will be more exhausted than ever before, but on the other you know what you’re doing this time. The worries are gone, much of the stress is also, and I’ve already found myself enjoying what Abby does rather than trying to analyse it at great length which I often did with Jess.

From my own experience, there is no bigger, life changing event from when your first child enters the world. It changes every aspect of your life from your relationship, your responsibilities and with the entire way you now look at the world. Having a second does not change your life by anywhere near that level, because you have already been through it and now have a complex baby proofed house full of cushioned corners and hidden knifes.

Having said that, it does change it. Mainly in the fact that where you had little nuggets of free time, stolen lunches and evenings out before… you now literally have none without the aid of grandparents. It also makes leaving the house on a deadline about as challenging as climbing Everest.

But let’s make it clear, this is not a downbeat article. The positives of having a child always outweighed any negatives ten times over for me. With number two that has jumped even further. I long to spend more time with my youngest; I can’t wait for her to get older so I can take her out and show her the world in a way she will understand. I was in the unknown with Jess and that was great, but with Abby I know how much amazing stuff there is to come and I cannot wait to get there with her.

We are lucky that Jess thus far adores Abby. She hugs her twenty times a day, dances for her, talks to her and insists she joins in on all of her card games. Over exuberance is thus far the only real problem we have had on that count. Having children is a strange old experience; you can feel that your life is over one minute and the happiest person on earth twenty minutes later. There are hard days, especially when somebody is ill, and there are easy days, when everything falls into place and you have a glass of wine in your hand by 7:30 with both sound asleep.

I was not as sure as my partner (Sarah) was about having a second so soon after the first. A longer age gap would have been easier and Jess did not really understand what was going on when Sarah first got pregnant again (although she was very excited by the end).

Ultimately though, I would not have changed it for the world. Jess’ face when we brought her through to meet Abby for the first time was, hands down, the single greatest moment of my life. Her face of total wonderment and joy was worth a thousand sleepless nights, projectile vomits, carrying both up a hill whilst your partner pushes a buggy and a scooter, tantrums over which socks to wear and cold, regurgitated food that they insist upon feeding to you. It was even worth having to watch Frozen 30 mornings in a row.

“My baby sister” she told me. Frankly, nothing else mattered.

Phill James is a good man, though he talks about football a little too often for my tastes. But if you, like him, love football and well-written rants about the players, you might want to read his (inexplicably named) football blog, The Hindu Monkey. It’s very good, really