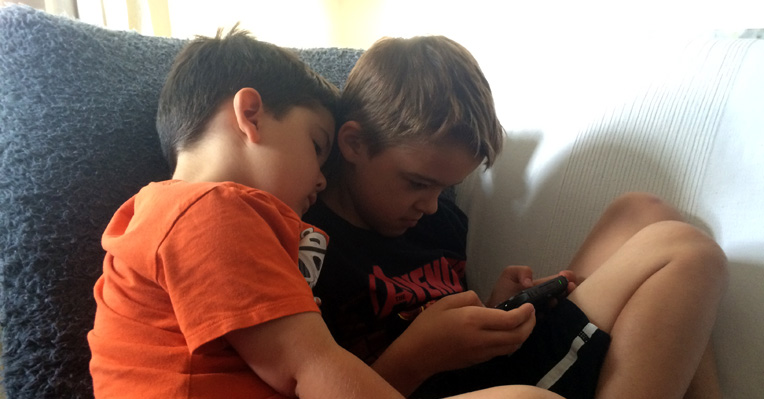 If my understanding of the nomenclature is correct, my children are “post millennial”, or “Generation Z”, or maybe even “Generation Google” – born well into the new millennium, with parents who were probably called “Generation Y” or some nonsense like that.

Another name I regularly hear applied to children born in the 2000’s is “Digital Native”, the implication being that they are the first generation who have never known a world without the internet, social media, smartphones and all the other gubbins that implies.

Whilst I’d debate the use of digital in this context (I myself have had access to computers for 80% of my life, so surely anybody born in the last 20-odd years could lay claim to this title?) I can certainly attest to the nativeness, digitally-speaking, of my two children.

But what I vehemently DISAGREE with is the assertion that this title should mean our children are somehow “missing out” on the things we experienced during our own upbringing.

The implication seems to be (and I see this argument at least once a week, in some form) that because they have access to tablets, smartphones, on-demand TV, the internet and many other luxuries, they are being plugged into some early form of ‘The Matrix’ – never away from a screen, addicted to the internet, unable to use a pen and pencil – crap like that.

Whilst a lot of these arguments come from the sort of people who would probably have moaned about the radio if they were born when it was invented, an increasing number seem to come from sensible, level-headed parents who (I’m assuming) feel over-whelmed by the choice and possibilities of this new, digital world.

Well, I’m here to say it doesn’t have to be that way. And I say that as one of the most digitally-minded people around. After all, I work in an entirely digital industry, I blog about digital, I probably spend half of my life connected to a digital device of one form or another.

But the only reason for our children to become sucked into this Matrix is if we let them – and I for one am not letting that happen. I think I’ve discovered the secret to holding back (or at least managing) the digital tide.

Gaming. Sure, my children like a computer game as much as the next kid – Robert has a massive affection for Minecraft, as I’m sure I’ve mentioned before, and Freddie enjoys his Innotab system. But both boys get just as much pleasure from board games like Ludo, Snakes and Ladders, Connect 4 and Cards. We regularly sit down as a family to play Ludo or Cards, and I’d wager that the kids love it just as much as their digital entertainment.

Reading. Whilst we’ve not switched over to eReaders and tablets yet, there are plenty of opportunities for our kids to enhance their reading with digital devices – read along systems, story-based games and the like. But the books we read with Robert and Freddie (and which Robert regularly reads by himself) are printed-and-bound. In fact, some of them were written before I was born – one of them (the Famous Five) before his GRANDPARENTS were born. So digital nativeness is yet to lays its paws on our reading time.

Yep, the secret I’ve discovered is… me. Or my family anyway. When we make time to play (real world) games with our children, they love it. When we read together as a family, or watch old movies, or do arts and crafts – they love it.

It doesn’t have to be family of course – anybody can play a board game or read a book with a child. But increasingly fewer and fewer people are DOING it – which is why children will turn to their digital devices, or YouTube, or games consoles – just like YOU would have done as a child, if you got the opportunity.

Our children aren’t being absorbed into the Matrix – we’re nudging them into it.

2 thoughts on “Fatherhood: The Secret to Anchoring Your Digital Natives in the Real World”