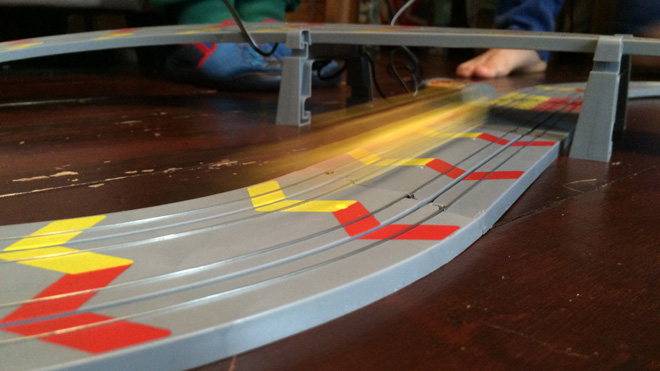 As most of you will know by now, I very rarely turn down the opportunity to review a new toy – it’s basically one of the main reasons I started blogging in the first place, let’s be honest.

So when the nice people at Hornby asked if we’d like to give their new ‘My First Scalextric’ a spin, I said ‘Yes’ quicker than a Scalextric car flying off a sharp corner.

We’re actually a Scalextric family already, with a very large box of the grown-up stuff up in the loft thanks to a spree in my early twenties. I’m not sure I’ve set it up since the boys were around (at least not in recent memory) but they’re both very familiar with the stuff – so they were very keen to try it, too.

The track itself – as you’d expect from any good ‘My First…’ toy – is a much simpler version than the classic set, though it sticks to the Figure-8 shape we all know and love. As far as I can tell you can only really do one ‘configuration’ with the track you have, but my two showed very little interest in swapping it around anyway. In fact, all they wanted to do was race – over, and over, and over again!

The set retails for about £30 or so, which seems like pretty decent value for a well-made electric toy. All the parts seem very child-friendly (I guess Hornby have had a good few years of experience at getting that right!) and it certainly hasn’t broken yet.

Unlike a classic Scalextric, you can disassemble the cars to fix or replace them, and the little wire brushes (the parts that connect to the track) can be replaced easily.

All in all, it’s a pretty decent toy that the boys both enjoyed playing with a lot. In fact, they’re still playing with it right now – which I can’t say about all the toys I review.