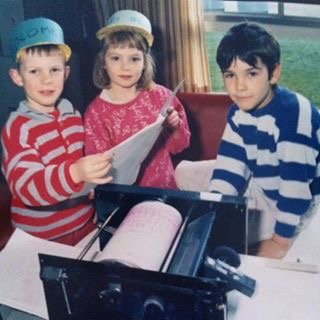 There are many moments in life where I empathise with my children, but very few of them hits as hard as today. On this beautiful spring Monday morning I find myself realising exactly how my children have felt on a number of occasions recently.

Today, I start a new job. Whilst this may be a regular occurrence for some, I worked at my last company for over a decade, so this isn’t something I’ve done for a while. Needless to say, I’m feeling more than a little anxious right now.

Anxiety is something which has been on my parenting mind quite a bit lately. Our eldest has always been quite an anxious child – something which clearly runs in the family if I’m anything to go by.

There are some occasions when Robert’s angst manifests itself in weird ways. Worrying he’s wearing the wrong thing on “own clothes day” at school for instance.

But there are other times where I expect a lot of children feel the same – including starting a new “thing” mid-way through. And we’ve done a few of those lately:

* Swimming lessons – Rob and Freddie have both started swimming lessons in the past year, and due to their popularity they were on a waiting list to join. Inevitably this means they eventually joined in the middle of “term” – so the majority of the other swimmers had been attending for a while. Getting them into the pool on that first lesson was parenting Level 10 difficult!

* Beaver Scouts – Just like swimming, Robert was on a waiting list to join our local Beaver regiment, meaning his first week was just another week for all the other attendees. As you can probably guess, the first few weeks were tough.

* Football – Last year I wrote an entire post about the drama of taking Robert to a football class, so I won’t rehash that again, but needless to say the mid-term start was one of the contributing factors to his discomfort.

The beauty of school, on the other hand, is that the majority of children in their year or peer-group start on the same day – so you know you’re in the same boat as everyone else. But these waiting-list / join mid-term clubs are a completely different ball game.

Starting my new job feels exactly the same. The company I’m going to be working for isn’t new, most of my colleagues will have been there for many years. As far as I’m aware, I’m the only one starting there today.

I don’t mind telling you, I empathise with my children a hell of a lot right now.

Of course, in reality my fresh start will probably be a lot less jarring than I’m imagining. I’m working in the same city – so 90% of my commute will be the same. My job will probably be fairly similar to my old one, and there’s unlikely to be many 7 year olds making me feel like a loser for forgetting my lunch money.

But however it pans out, I can tell you one thing for sure: next time I drop-off one of my children for their first day at something new, I’ll be doing so with a renewed empathy for how they’re feeling.