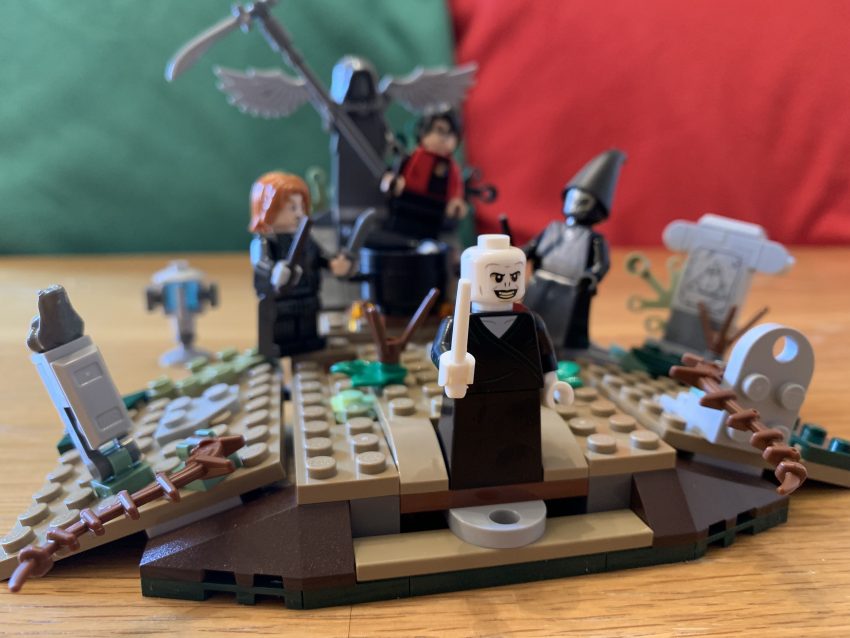 It’s been a bit of a while since I’ve been able to review a new Lego set, but I was recently contacted about the latest additions to the Lego Harry Potter range – and naturally, I jumped at the chance.

The set I was given to review is named ‘The Rise of Voldemort’, and as the name would suggest, depicts the fateful moment that Harry’s arch-nemesis is finally able to return to the Wizarding World in human form. It’s one of the creepiest moments in the 8 film series, so I was curious to see how it turned out in Lego form…

Before we get building, here are the important details:

As you can see from the contents of the box, it’s not a massively complicated build – two average-sized bags and a brief instruction booklet. It should only take you about half an hour to build in total. There aren’t many complicated techniques involved, so a 6 or 7-year-old could easily complete it unaided.

As with all of the recent Harry Potter models, the Minifigures are one of the best elements of the set. The miniature Harry, in particular, had a lovely level of detail in his outfit, and the Voldemort figure is suitably creepy. The Peter Pettigrew figure really steals the show, though, and includes one of the most recognisable headpieces of the range.

The set also includes a number of new pieces that I’d not seen before, including a lovely green leaf piece and a creepy grey frog. The tiny baby Voldemort is especially good, though I’m not sure there are many other models you could incorporate him into, ha ha! A zombie maternity ward?!

As well as looking good, the model has plenty for little fingers to play with, including a clever trap-door mechanism which allows old Voldemort to spring up from the earth, surprising his graveyard mates in the classic scary fashion. All four of the figures have their own wands, including a white one I hadn’t seen before. A nice touch.

My favourite element of the entire model is the winged angel that sits atop the grave of Voldemort, sporting a really nice new method for holding the wings on. I might have to replicate this method for other statues in future MOC builds, as it has a very gothic feel which would look great in a church or historic house.

The final model is fairly compact, and not too fiddly to move or store. That might sound like a strange quality to report on, but if you’ve ever had to move a child’s Lego model from one room to another and dropped it mid-journey, you’ll know what I’m talking about!

It’s definitely a nice addition to the Lego Harry Potter range – the series has come a long way since the original Hogwarts Express model, which still sits on my shelf at home. The Minifigures are great, and model is simple to build and it should please any junior Harry Potter fans in your household.