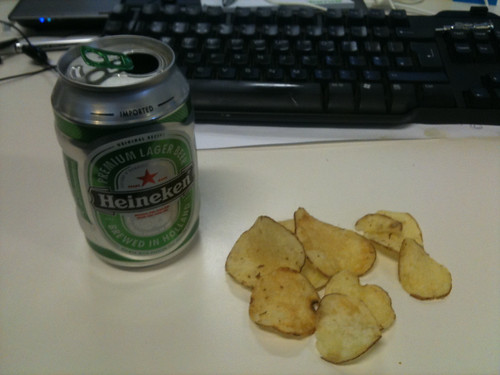 Today’s photo was taken at one of the most joyous times of the week – beer o’clock (aka . 5pm) on Friday afternoon. It’s not a complicated concept – at 5pm we down tools and get free beer and crisps. Simple, yet brilliant. Since I usually drive to work these days, I’ve generally not partaken much recently, but this week I was delighted to find a stubby Heineken in the mess of beers on the table, so I opted to partake in the delights.

You may notice from the setting of the photo that I was *slightly* cheating on the concept of beer o’clock, in that you’re meant to leave your desk and mingle with your work colleagues. In my defence though, I was (on a dare) trying out Chat Roulette at last, at the end of which we’d attracted at least a dozen spectators. So it was a good group experience – especially the final part of it, which I won’t go in to here, but needless to say somebody was doing something on their webcam which made at least 2 people walk away hooting with laughter and shock!