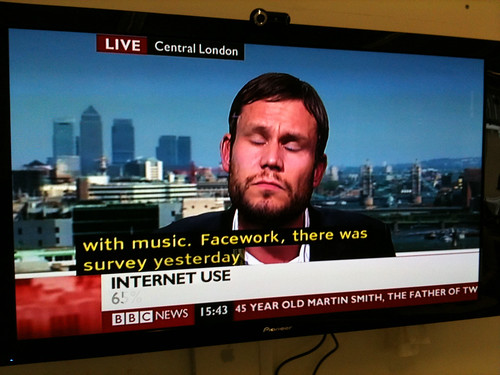 My Year in Photos – May 19th – "It’s @JustinPearse on the telly!", originally uploaded by henweb.

In my admittedly-limited experience, seeing somebody you know on the television *never* gets boring, so it was with some excitement today that I noticed New Media Age Magazine’s Justin Pearse, full-size on our office TV. Justin was being interviewed by the BBC News folk about the ‘Internet Use’ study which was released by UKOM today, and did a super job – though my attempts at capturing a photo of him only turned out photo after photo of him seemingly asleep. Oh well, it’s probably funnier like that anyway, so who am I to complain?!