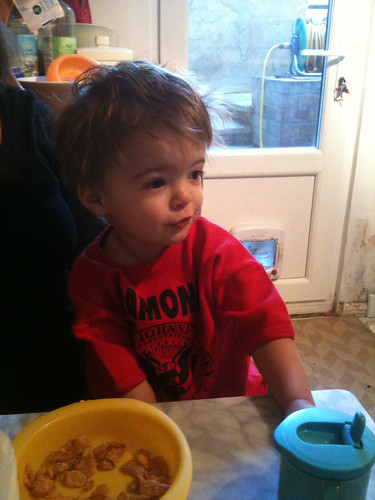 My Year in Photos – May 28th – "What would Joey Ramone do?", originally uploaded by henweb.

Today’s photo shows Robert in a new t-shirt – featuring the legendary Ramones. I say ‘new’ – it’s actually about two years old, and was kindly given to Robert by one of my colleagues in our Cape Town office, Rick. After Robert was born, Rick was so keen to get Robert in a Ramones shirt that he took a punt and got the smallest one they had – which happened to be 2-3 years old. So as Robert approaches his second birthday, he’s finally big enough to wear it without looking like he’s in a tent. Thanks again, Rick!