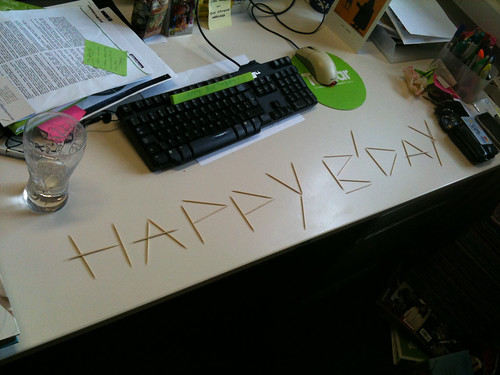 My Year in Photos – September 30th – "My birthday!", originally uploaded by henweb.

As you will probably know if you follow me on Twitter or Facebook, today was my 31st birthday. As most of you will also know, birthday’s tend to become much less exiting occasions when a) you’re older and b) you have to work on the day. But to give credit where it’s due, my boss Tanya Goodin made a LOT of effort to make my birthday memorable this year – in no less than 23 different ways.

Tanya and I have a long-standing joke based on a piece of wisdom Tanya once read in a famous actresses (?) diary – “My birthday today. Insufficient fuss made”. We’re both of the opinion that if you’re going to be made a fuss of any day, your birthday is the prime candidate. So we have regularly attempted to out-do each-other by wishing each-other a Happy Birthday in multiple ways. As mentioned above, Tanya managed a whopping 23 ways, including (but not limited to):

Facebook, Twitter, E-mail, Text Message, Picture Message, In person, on paper, in mouthpicks (see above), via Koala, via Children shouting, via somebody else, in powerpoint – the list goes on and on.

December is going to be tricky!