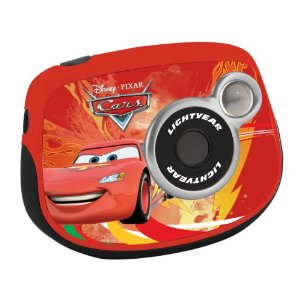 Well, it’s finally happened – I’ve been sent a product to review by a brand! It’s my first one, so be gentle with me if I’m not very good…

How much is it?

Both Amazon and Argos have it on sale for £19.99 at the moment, in their toys department (obviously!)

What’s good about it?

First off, the price – it’s probably one of the cheapest children’s digital cameras on the market at the moment, with the added kid-friendly benefit of featuring one of the hottest characters of the moment, Lightning McQueen.

It’s quite a robust little camera – ours has already been dropped several times, and still survives to tell the tale. The battery life seems pretty good, the photo quality is about standard for a children’s camera – nothing you’d want to take on the trip of a lifetime, but certainly adequate for the needs of the average child!

Set-up is very easy, though the instruction manual is a tiny bit complicated in my opinion. It’s very easy for a child to operate though, and with a little help from a grown-up they’ll be snapping away in minutes.

Here’s an example of the image quality the camera achieves:

What’s not so good?

It’d be unfair of me to compare this on the same basis as other digital cameras I’ve owned, since they were all a LOT more expensive – but I was a little disappointed in the resolution of the pictures, as well as the amount of built-in storage.

On lowest quality settings it can fit over 300 photos on, but at “high quality” just 26 – though the quality of my son’s photography isn’t really that fine so far, so he doesn’t seem to care!

My son is a MASSIVE fan of Cars and Cars 2 toys so he was excited enough with Lightning McQueen’s appearance on the front. We own a Mothercare children’s digital camera, which actually takes lower quality photos (and doesn’t include a flash) but seems a little more toddler-friendly, but to be fair to makers Lexibook this is aimed at slightly older children.

It’s certainly not a camera I’d borrow from my son, ha ha, but for his basic 3-year-old needs it does the job very well – and is a lot less expensive than other cameras aimed at Children.