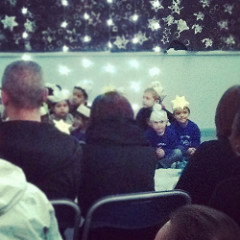 I was originally planning to post a video with this piece, but modern life appears to have put a dampner on those plans – something I had previously thought was just a joke fuelled by Daily Mail readers turned out to be true: You really can’t put pictures of other people’s children on the internet anymore.

Yesterday was an exciting day for my wife and I – Robert’s class at pre-school were doing a small Christmas “show” for the parents, singing Christmassy songs and wearing little Christmas hats they had made. Needless to say, we were VERY excited about this – as it seems other parents were too, as the room was packed.

Like every other parent there, I was armed with a camera and/or smartphone to take some photos of my little angel, and maybe even a few video clips. But the headmistress quickly put an end to that plan, as she announced the following right at the start of the show:

We *do* allow you to take photos and record videos of this performance, but we don’t want them to end up on the internet. So please, feel free to take photos but don’t go and email them to people – they are just for your own private enjoyment.

Aside from the obvious loopholes that I immediately found in her statement, and the slightly odd nature of the final line, I suddenly started thinking how amazing it is that people are still worried about their children’s photos ending up on the internet. In the days of Facebook, YouTube and all the other ways of sharing our content, I think I had assumed that people were now much more relaxed about the possibility of a picture of their child ending up online – it turns out I was wrong.

Well, I SAY I was wrong – there’s nothing to say that every single parent in the room wasn’t thinking the same thing as me, and that the school just adopted this policy because it’s the “done thing” these days. But I wasn’t going to argue the point, obviously, and will try to respect the wishes of the school.

It does make me wonder how precious you really need to BE with photos of children though – is a picture of video of a child singing “Santa got stuck in the chimney” REALLY that appealing to the weirdos of the world?! Don’t get me wrong, I’m not suggesting people should be posting the more “intimate” pictures of their kids online – especially on unsecured or free-to-see sites like YouTube. But a child in a school uniform singing? Really?

Perhaps I’m being niaive – I guess it doesn’t really matter at the end of the day, you can only really speak for your own family after all. But it does make me wonder whether we haven’t all taken this privacy thing a LITTLE bit too far…

(P.S. I realise I have included a small photo at the top of this post, but it’s so small that you can’t ACTUALLY identify anybody in it, so I assume I’m safe with it. Don’t try to click it though, it doesn’t get bigger!)