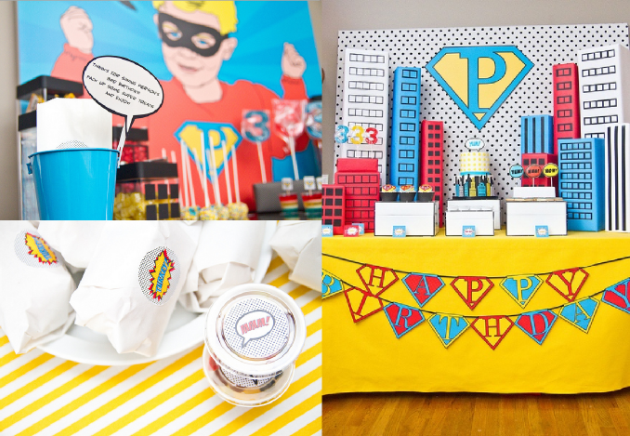 With both Robert and Freddie’s birthdays coming up in the next couple of months, our minds have turned to the sticky subject of birthday parties. Obviously with Freddie it’s a first birthday, so his opinion on how it’s spent is not really top of our priorities – so long as he gets food and a bit of sleep, he’ll be happy.

But with Robert it’s his fourth, and more crucially the first he’s had where he truly understands the concept of both a birthday and a party – especially now that he’s at pre-school, being invited to lots of other birthday parties himself. Until this year, the only parties he’d really been exposed to were those of our friends’ children, which is a fairly small group. But now he’s in a class of almost 30 children, and the ferris wheel of parties has started to crank up…

With such a small frame of reference, I’m hoping it’s going to be fairly easy to impress him. Whilst he loved his friend’s party at the local ‘soft play’ centre (to which every child in class was invited, at much expense), we’re also very aware that come September he’ll be going to a new school with a whole new bunch of friends, so worrying about ‘keeping up with the Joneses’ at this point is a little pointless.

We’re currently toying over several different ideas, including a couple of family-based gatherings which shouldn’t take TOO much preparation and possibly a trip to London. But in researching the different options (and being nosey on Facebook), we’ve found a few examples of parties that have slightly unnerved me in their scale.

For instance, take this party organised by blogger Valeria Beirouth. She decided to make it an ‘Octonauts’ themed party, which is something Robert would love too. But I’m not quite sure we could arrange something like this, even with an army of helpers and a year to prepare. Take a look at the evidence:

Then, in typical blogger fashion, I started reading “Top 10” lists – like this one: “10 Absolutely Amazing (But Totally Doable) Kids Birthday Parties“. These look SLIGHTLY more achievable (without a party planner) but still make me shudder with the thought of how much effort went in to them:

Needless to say, I don’t think we’ll be going to that much effort, particularly for a 4-year-old. I’m also quietly relieved that the neighbourhood we currently live in almost certainly means we won’t even be GOING to any parties like those any time soon – so the boys won’t be getting a taste for it. But it’s got me wondering how much is enough, and when do we need to start worrying more about this?

I’d love to hear any suggestions or thoughts from you in the comments!

4 thoughts on “Fatherhood²: Birthday Parties for Kids – How Much Effort is Just Enough?”