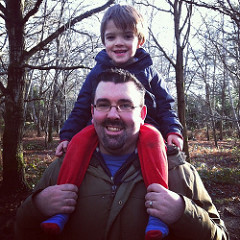 I should probably start at the beginning…

When I first started on my journey as a ‘daddy blogger’, I did it without much thought for the future. Having coming off the back of a year of photo-blogging, and with the birth of my second son looming on the horizon, the only plan I had was to write a few posts and share a few experiences.

Over the past 2 years, this blog has turned in to a fun project for me – and it’s even gained a few readers and followers along the way. But until very recently, I’ve kept myself in somewhat of a small bubble when it comes to other bloggers. When I first started I approached a few other dad bloggers – no more than a dozen at most – and became virtual friends with a few of them, following them on Twitter and reading their blogs regularly. But that was about where it ended. Until this week…

One of the few bloggers I had the luck to ‘meet’ during the first few months was Oren Miller, aka A Blogger and a Father. Oren writes a brilliant blog and has gained an impressive number of fans for it – and rightly so. Oren also seems to be a very sociable chap, and has gotten himself to be quite a well-known face in the dad blog community. So it was not too much of a surprise when I was invited to my first dad-blogging community by Oren.

Oren has started up what seems to be one of the only groups for Dad Bloggers, and so far there are over 120 dads in the group – an impressive mix of dads from all over the world. It’s already proving to be useful, too. I’ve gained useful advice not just on parenting but on blogging too. People are sharing their experiences, pooling their resources and – more importantly – sharing ideas and trying to do good things. It’s all very admirable and I’m proud to be a member.

The only problem so far is this: I’m now feeling pretty damned inadequate. Not as a father necessarily, but definitely as a blogger. These guys are outstripping me in every way possible! So far, as well as joining the group and getting to know a few, I’ve also followed about 50 of them on Twitter – so my Twitter feed is now filling up with dad-talk and posts to read. And boy oh boy are they posting. Here’s a few of the reasons they make me feel like a failing blogger:

…and then there’s me. The most adversity I’ve faced so far is Freddie learning to talk at a slower pace than Robert, or maybe the boys’ preference for 6am wake-up calls. I’ve not used my blog to fight for many causes, I’ve probably done more than my share of moaning, and I’m pretty crap at writing more than once a week.

In short, these amazing dads are making me wonder if I should even bother. Why would anybody want to read my boring anecdotes and gripes when there are such amazing things being written by far more accomplished dads than myself?

Don’t worry, I’m not digging for compliments here – I’m pretty comfortable in my own inadequacies, and I don’t think I’ll be giving up quite yet. But here’s one good piece of advice that I’d impart as a result of this whole exerience: If you’re reading my blog (and aren’t a member of my immediate family – which probably leaves just one or two of you!), go read some other dad blogs. They’re saying much better things than me, so you’ll probably get some much better advice/anecdotes from them. The dads are starting a revolution in the world of blogging, and even though I’m barely clinging on by the fingernails, I’m proud to be coming along for the ride!

3 thoughts on “Fatherhood²: Watch Out – The Dads are Coming!”