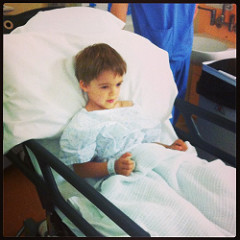 As some of you will know – either from my recent posts on Twitter/Facebook, or from my post “Fatherhood²: A Hospital Stay on the Horizon“, we recently took Robert in to hospital for an operation. After a long and convoluted consultation and referal program (lasting over 12 months), Robert was referred to the RBH to have his tonsils, adenoids and tongue-tie removed – a sort of “buy one, get two free” operation if you will!

The operation itself went well – the procedure was straight-forward, and the patient is now recovering as planned at home with mum. But the build-up and come-down from the op have thrown up a few unexpected twists which I for one never anticipated. Here’s the five biggest lessons I’ve learnt from the experience – some of which other parents may find useful when their own little-ones head to hospital!

In order to get Robert prepared for the anaesthetic before the operation, the nurse gave Robert a sedative – and the effect was a lot different to what we expected. At first it made him woozy and floppy, but once we got him on the trolley ready to go down to the theatre he went a little bit loopy. He tried to get off the bed (giggling and smirking) numerous times, and wouldn’t behave himself in the slightest. To be fair, he was probably very scared and worried – but the sedative didn’t quite work in the way we expected, to say the least. I was told afterwards that sedatives and anaesthetic can both affect some children in crazy ways, so we’ll know to expect it for next time.

In the run-up to the hospital stay, a number of friends and experts recommended we read hospital-based books to Robert, to get him used to the process. Topsy and Tim, Rees Bear and a few others are definitely recommended by us – and generally they did exactly what you’d hope. But one aspect seemed to have a slightly strange effect on Robert – and a friend has told us that it had the same effect on her son too. Namely: “Magic Cream”. That’s what they call the numbing cream they give you before you get the anaesthetic. Robert actually refused to have it, for reasons we didn’t understand. As it turns out, it might be the “magic” element he didn’t like – which actually makes a lot of sense, given the strange unknown nature of a new experience like a hospital stay. So think twice before you hype the benefits of magic cream…

3. Trust may be an issue afterwards

As with the magic cream, Robert seemed to feel rather agrieved at being anaesthetised – and was particularly upset when he woke up after the op. For the next day or so, he displayed a clear mistrust of taking anything – medicines, creams, even Vaseline. Despite not really knowing what went on during the operation itself, Robert clearly knew that SOMETHING traumatic happened – and wanted to avoid it happening again at all costs.

4. Scarring may not be where you expect it

With a tonsillectomy/other ENT procedures, the post-op scarring we were most focussed on was the throat itself. We expected some struggles getting Robert to eat, or a lot of bleeding from the throat itself. What we weren’t expecting – and what has turned out to be the biggest upset for Robert – is the strain on his lips/mouth. As you might imagine, even a short ENT procedure – especially on a child – involves trying to get their mouth as open as possible for a fairly long period. I assume they clamp them open, though somebody might be able to enlighten me there. Either way though, it took its toll on poor Robert’s mouth, and has turned out to be the thing which has upset him most – he refuses to open his mouth more than a crack. And when he does, he tends to bleed from the corners of his mouth – as if he’s been struck by particularly bad double cold-sores. It’s certainly not an insurmountable hill to climb in terms of his recovery, but it wasn’t something we’d anticipated at all…

5. Doctors are brilliant, as is the NHS

Despite the confusion (for Robert) and the slight trauma (mainly for us), I’ve got to say that both Sara and I were really impressed with the whole process. The doctors and nurses were friendly and really great with Robert, the hospital was brilliantly equipped for children (they even had a portable Wii console – see below) and the whole process was as smooth as you could hope it to be. It certainly made me appreciate how brilliant our National Health Service is! A big ‘Thank You’ to everyone involved is definitely due.

2 thoughts on “Fatherhood²: 5 Lessons I Learnt From Our Hospital Stay”