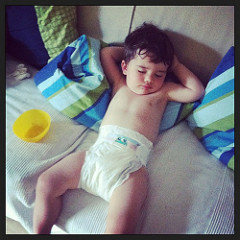 With the recent spate of unusually warm weather, bedtime has become a topic of regular conversation in our household. Our usual 7pm kids bedtime rule has taken a big hit for a number of reasons, namely:

1. The heat means Freddie is sleeping without his ‘gro-bag’ sleeping bag – leaving him free to cause terror in his cot and team up with his brother for mischief

2. The bright evenings (naturally) lead the boys to question why they have to go to bed when it’s still ‘day time’. Coupled with next door neighbours who happily let their small children stay up way past 10 – and who our boys can hear through their open window…

3. A couple of posts from other dad bloggers of late have lead me to question how we will manage the process of letting Robert (5) stay up later than Freddie (2) when they both share the same room.

4. Robert’s recent operation and subsequent time off school lead to a number of bedtime/sleep changes, and despite Robert now being fully recovered, the hangover seems to have remained.

So with all these issues swirling round in our heads, it was with great interest that I read today’s news about new research on children’s sleep habits.

As has been widely reported in the press today, research published in the Journal of Epidemiology and Community Health has revealed that children who are regularly allowed to stay up past 9pm can have their development and behaviour affected.

The study, which included data from 11,000 children across the country, concluded that children with no regular bedtime (or who went to bed after 9pm) scored lower in tests for both reading and maths. The authors of the study have suggested that this lack of sleep may disrupt “natural body rhythms” and disrupt how our brains learn new information.

According to the amusingly-named Professor Slacker (quoted on the BBC News website):

“The take-home message is really that routines really do seem to be important for children. Establishing a good bedtime routine early in childhood is probably best, but it’s never too late.”

As a parent who is not quite ready to lose my early evening wind-down time to a tired, post-children’s-TV child, it is a relief to know we aren’t just being selfish in sticking to our 7-7.30 bedtime routine. Whilst I’m sure Robert in particular is soon going to be keen to stay up later, I am reassured to know I won’t be being TOO unfair if I insist he sticks to it for a little while longer.

When do your children go to bed, and how did it affect your own routines? I’d love to know in the comments!