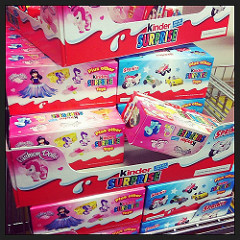 As a fully-fledged marketeer, I often find myself taking a different perspective on issues that other parents are debating. From TV shows to prams, I often find the (admittedly small) marketing part of my brain masticating a problem from a different view to other mums and dads. So I’ve been really interested lately to see the debate about gender stereotyping – something I didn’t give a second thought to before I became a dad.

As a parent of a 2 and a 5 year old, my exposure to gender stereotyping has become a lot higher in the past 18 months – with a few ‘milestone’ moments piquing my curiosity in particular:

If you’re not up to speed by this point, here’s the problem in a nutshell: toys, games, TV shows and all sorts of other stuff market things to girls and boys differently. I noticed a perfect example of this just last week, while watching the adverts during Channel 5’s daily ‘Milkshake’ segment: Disney’s Minnie Mouse toys include a cheerleader (complete with ‘Oh Mickey’ cheer) and an air hostess, while their Mickey toys have a much more boy-centric theme.

Now as I said at the start of this post, my marketing hat means I view this problem slightly differently than a lot of consumers – I can see exactly why marketers decide to pitch their toys this way. Namely: Because it works – if it didn’t, we’d be living in a much more equal world by now. I know that doesn’t make it right – but if we’re being fair, you can’t blame marketers for exploiting a bigger issue in our society to make their crappy toy stand out against another crappy toy. After all, that’s the very point of marketing – nobody said it was supposed to be ethical.

But by the same token, I can see that marketers have just as much of a responsibility to change these stereotypes as anybody else – though the ‘early adopters’ of any sort of challenger movement will be the ones who take a hit while everybody else catches up.

So it was reassuring to see one of the campaigns on ‘Let Toys be Toys’ has seen some success recently – namely the news that Toys R Us (UK) have agreed to remove their ‘Boys’ and ‘Girls’ signposting from their stores.

Not quite so reassuring was a move in the opposite direction from Kinder, the makers of the famous novelty egg-based chocolate treats. Having sold their eggs for decades without even a hint of gender stereotyping, they’ve recently launched new pink and blue varieties (see photo above) to cater to more ‘traditional’ stereotypes. Why they felt the need to do this when their toys used to be pretty gender-neutral (and unlikely to cause much upset to either sex) is a mystery to me, and runs counter to the progress other retailers and brands are making.

Clearly this is a bigger issue than one blog post could hope to cover in any depth – and I’m certainly no expert. But it’s a debate I’m finding myself increasingly interested in, and one which is changing the way in which I view certain aspects of my childen’s lives. I’m really interested to hear other parents’ views on the matter, particularly those who might have a slightly different take on things to me – I will quite happily post a follow-up or two if you’re passionate enough about the subject. Hopefully the more we debate and discuss topics like this, the more we’ll be able to help things along.

6 thoughts on “Fatherhood²: Gender Stereotyping – A Marketer’s View, aka What a (Kinder) Surprise, Will Boys Be Boys?”