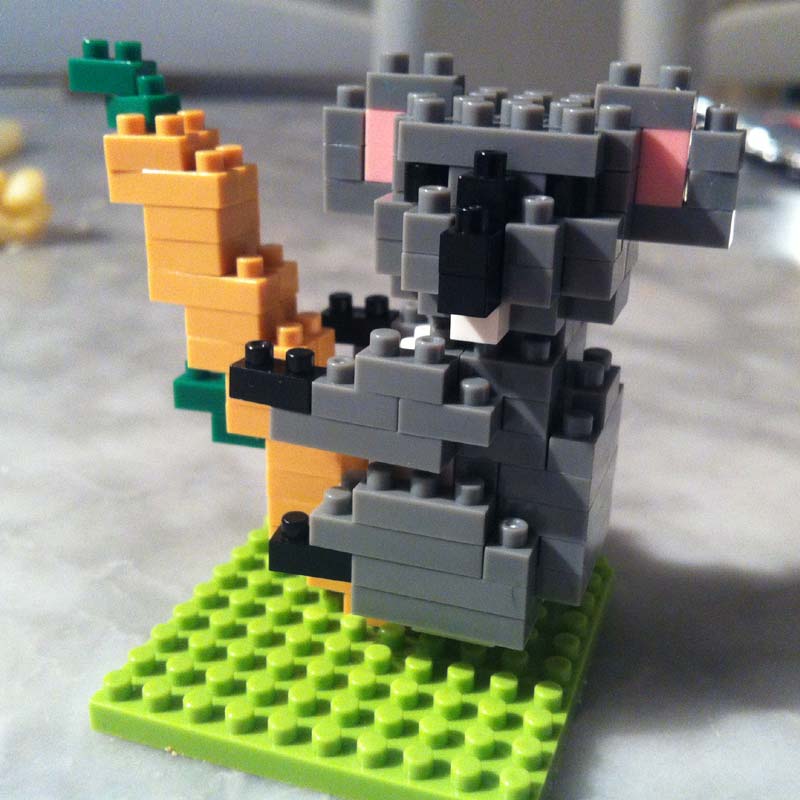 As most of you will know, I’m a big fan of Lego, and have been for most of my life. Because of this, I often find my Facebook or Twitter timelines populated with Lego-related stories, accompanied by messages like “I saw this and thought of you!”. Occasionally, I even get Lego given to me as a result of this obsession.

A good friend of mine is currently living in Australia, and recently announced he was sending me a gift he’d seen which made him think of me – so I was very excited to unwrap said gift today: A “Nanoblocks” model of a Koala. I was extremely touched – and preceded to build the little blighter with the boys. And that’s when I realised that Nanoblocks are easily the most frustrating toy in the entire world.

If you’re not familiar with these tiny building blocks, here’s what the blurb on the back of the packet says:

Nanoblock is an extremely small building block, the smallest part is 4x4x5mm! This amazingly small micro-sized block makes it possible to create more detailed and even smaller projects than what can be made with standard sized blocks.

As you can see from the photo below, the result of my build was pretty much what it was supposed to look like – at least from what I could tell from the horrendously complicated instructions. But the process of making it nearly drove me up the wall. Honestly – I don’t think I’ve ever had a toy make me angry before, but these tiny, fiddly little blocks increased my blood-pressure significantly.

Don’t even get me started on their nonsense claim that the “micro-sized block makes it possible to create more detailed projects” – what the heck? Does that even make any sense?!

I’m sure there are loads of people who love these tiny bricks – and to be fair to them, when Robert took the (plentiful) spare bricks he managed to make a fairly decent model, probably benefiting from having much smaller fingers than me. But they’ve been in the house for less than 2 hours and I’ve already found 2 pieces embedded in my socks, and several pieces have already fallen off the koala.

So, if you’re looking for a complex model to keep a tiny mind occupied for hours, I’d recommend giving Nanoblocks a try. But don’t come crying to me when you find a half-built model scattered around the house, having been thrown at the wall in frustration…

3 thoughts on “Fatherhood²: Is This The Most Frustrating Toy Ever?”