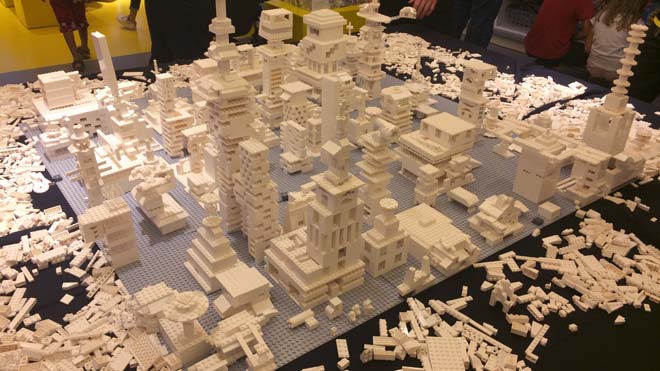 Back in May, a nice lady from an agency invited me along to Westfield shopping centre in London, to review what it was like for a dad (Fatherhood²: Review – Westfield Isn’t Just for Clothes Shopping).

When said nice lady discovered that I spent the gift card she gave me in the Lego shop (well duh!) she clearly wrote a little note next to my name in her spreadsheet which said “Obsessed with Lego”.

As it turns out, that probably-imaginary footnote seems to have lodged in her head – when she emailed me a few weeks ago about another event the Westfield were staging, she marked the title of the email “[Something boring and PR-ish] IT INVOLVES LEGO!!!” – I like her moxy already.

The event she wanted me to head down to was a ‘Pop Up’ event at the Lego store, celebrating the launch of their new ‘Lego Architecture’ box – which you can see in the photos below. Westfield have a lot of Pop-up events over the Summer, it seems (find out more details here).

The new product is basically (let’s not beat around the bush here!) a big box of white Lego pieces, which you can use to make your own architecture models.

I’ll be blunt here – I don’t really see the point, since if you like the Architecture range you’re probably going to enjoy the satisfaction of building the model to the architects exact specifications, surely? But hey, that’s just me – maybe I’m wrong. Either way though, it’s a box of Lego and I’m not going to devalue that.

Anyway, in her haste to invite me and my excitement to accept, I never really asked what I was supposed to be reviewing – which basically meant I spent half an hour playing with Lego, bought myself a couple of models and left happy. I really must learn to ask for better briefs!

The Westfield centre was, as usual, full to the brim with shoppers who seemed very happy. The Lego store was also full – the new ‘Make your own minifigure’ station seemed to attract little kids like some sort of magnet. I had to stop myself from blurting out “Stop messing the pieces up! Somebody will have to tidy that all up, you little tyrant!”. *ahem*

The Lego Architecture ‘Pop Up’ was pretty nice, and I enjoyed making my own (admittedly rubbish) model – a crappy interpretation of Buckinham Palace. Not pictured, because it was rubbish.

As always, I took a bunch of photos, so take a look and knock yourself out. And go to the Westfield if you get a chance. Have I mentioned it’s got a nice Lego store in there?!