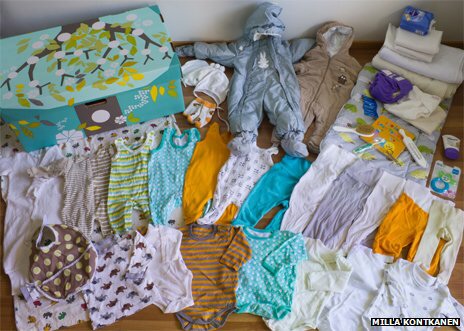 The photos generated a huge amount of interest in the Finnish system – but other than showing us the contents of said box, didn’t do justice to quite what an awesome initiative it is. So I’ve been doing a bit of digging myself…

First started in 1938, the maternity boxes were originally only offered to expectant mothers in low-income groups, but since 1949 they’ve been available to any mother who wants one.

As you can see from the photos, the boxes provide a number of essentials for parents-to-be, including nappies, sleeping bags, baby-grows, blankets and an all-weather coat (great for the cold Finnish climate!).

The awesomeness doesn’t stop there, though, with the maternity box being cited for a number of great statistics. Here’s 11 things you need to know about them:

1. All mothers are offered a choice between the box or €140. Unsurprisingly, with the box content being worth a lot more, most opt for the now-much-loved boxes.

2. As well as the contents of the box, the box itself (plus the included mattress) provides a ready-made crib – many Finnish babies spend their first few nights in the maternity box, and have done for many generations.

3. The clothing provided is entirely gender-neutral, meaning it can all be passed down and passed on between family and friends.

4. Each year’s box differs slightly in style or colour, meaning many Finnish parents use that year’s style to identify other parents with new babies. They’re ideal for parental networking!

5. In order to obtain the box, new mothers need to attend a physician or midwife by the fourth month of pregnancy – ensuring they get the full benefit of the Finnish health service, right when they need it.

6. As a result, Finland has one of the lowest rates of infant mortality around – a figure which was vastly different back in the 1930s before the scheme started. Back then, 65 in every 1,000 babies died. Today, that figure stands at just over 2 – for comparison, the UK is 4.5 and the USA is 5.

7. The maternity box scheme has also been credited with contributing to Finnish parents happiness – with one recent report claiming the Finnish were the “happiest parents in the world”

8. The contents of the box have changed over time. At one point they included feeding bottles, but this was soon phased-out in a drive to encourage more mothers to breast feed. The same happened with dummies.

9. The nappies supplied are cloth – no disposables in sight, meaning the boxes are also better for the environment!

10. The inclusion of the box/crib meant that many parents who would have at one point been forced to co-sleep with their child now had the opportunity to sleep apart from (but still close to) their baby.

11. Even though the box is designed for new parents and babies, they even include a picture book – helping to encourage and promote literacy from an early age.

So there you have it. Not only does the maternity box help new parents to cope with the financial stress of an impending birth, they also help in a variety of other ways.

If only more governments would take note and learn from the Finns!